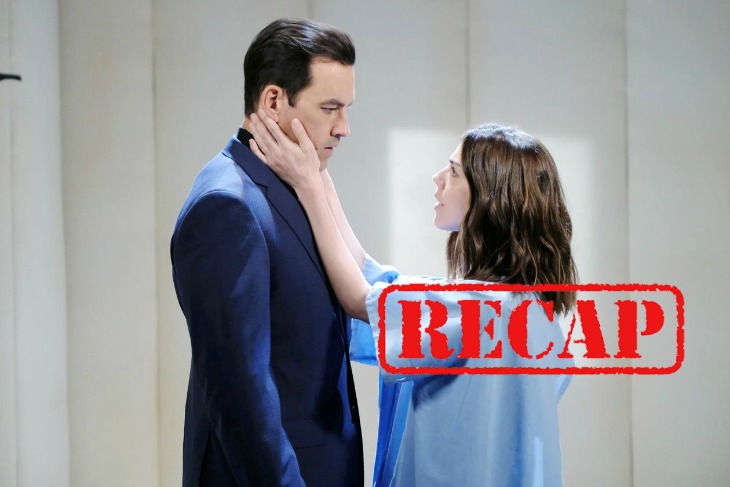 Days of Our Lives (DOOL) recap for Monday, December 3, 2018, reveals, Rafe (Galen Gering) asks Hope (Kristian Alfonso) what she was doing on Smith Island. Hope remembers her conversation with Ted (Gilles Marini) over the satellite phone.

Hope tells Rafe she went after a locket for Abby (Kate Mansi). Rafe questions Hope about the locket. Hope and Rafe talk about Ciara (Victoria Konefal), she would do anything to protect Ciara from Ben (Robert Scott Wilson). Rafe asks Hope for the locket again; she wants to see Jennifer. Rafe offers to take Hope to see Jennifer (Melissa Reeves), she refuses.

Ben tells Ted the police could have his phone tapped. Ben tells Ted if he wants to talk they do it in person. Hope calls Ted and asks what happened. Ted tells Hope that Ben wants to meet in person. Ted is afraid Stefan will have him killed if he sees him but tells Hope she will have to set it up. Hope says she can’t believe she’s lying to her husband, Rafe walks up behind her and hears her.

Days of Our Lives’ Will (Chandler Massey) confronts Kate (Lauren Koslow) in the square and tells her he knows what she did. Will demands to know why Kate would do such a horrible thing to the man he loves. Will asks what Kate and Gabi (Camila Banus) were talking about the truth coming out.

In the latest #DAYS, Kate tells Roman she's got the goods on Stefan.https://t.co/ZsCmioRrzb pic.twitter.com/uDKQlba4CR

Kate tells Will it was about Abby. Gabi tells Will she and Kate were talking about Abby and how the truth needs to come out. Kate tries to leave with Gabi, but Will won’t let her. Kate saw an opportunity, and she took it. Kate had just lost her husband and Dimera; she wanted Titan to establish a new place of power. Kate didn’t feel loyalty to Sonny(Freddie Smith) because Will was with Paul (ex-Christopher Sean).

Kate is sorry, she didn’t want to do anything to hurt Will. Will asks if Kate is lying about knowing where Ted is. Will asks Kate to come clean, and she refuses, it could hurt her career and cause Victor (John Aniston) to come after her as well. Will promises not to say anything; he tells Kate she will because it’s the right thing to do.

Days of Our Lives’ Sonny asks Chad (Billy Flynn) if he knew about the lawsuit and didn’t tell him. Chad asks why he would do that; Sonny wants to know that too. Sonny tells Chad that he wanted to use the company to get even with Stefan (Tyler Christopher). Sonny demands to know the truth, did Chad know what Kate was doing. Sonny tells Chad they have been friends for years, brothers, even.

In the latest #DAYS, at Bayview, Abigail rips into Chad for betraying her.https://t.co/ZsCmioRrzb pic.twitter.com/grlz8aOhJF

Chad tells Sonny he did know and didn’t say anything. Chad thinks they can work this out; Sonny doesn’t trust him. Chad never meant to hurt Sonny. Chad tells Sonny he changed when he put on Stefano’s (ex-Joe Mascolo) ring. Chad tells Sonny that he has this desire for revenge and couldn’t stop himself. Chad offers to resign and give Sonny his job back; he doesn’t want that. Will comes in and asks Sonny what happened. Sonny tells Will that Chad knew. Will doesn’t know if he got threw that Kate, she walks up behind him and says he did.

Stefan tells her he loves Gabby. Abby says she and Stefan can have a life together; he tells her she’s Abby and begs her to stop doing this. Abby kisses him and asks which one would do that. “Gabby,” tells Stefan they made love and made a baby together. Stefan says he signed the papers and had Abby committed. She tells Stefan he can do whatever he has to for her to be released. “Gabby,” tells Stefan the longer she is there, the more likely Abby is to come back. She kisses Stefan again and asks him to believe her. Stefan tells her he has to go and leaves. Stefan goes to see Charlotte and asks if her mother is back.

Days of Our Lives’ Kayla (Mary Beth Evans) stops by the pub and sees Ciara working there. Kayla hopes that Tripp (Lucas Adams) and Ciara can get back together. Ciara tells Kayla she doesn’t think so because she has feelings for someone else. Kayla asks if Ciara and Ben are dating, she tells her no. Ciara tells Kayla she promised to have dinner with Ben when he gets a job and a place to live. Kayla tells Ciara she hopes that doesn’t happen. Gabi goes to Kayla’s office to get a copy of the original paternity test results. Gabi gets the results and runs into Kayla on the way out of the hospital. Kayla wants to talk to Gabi about the sedative she prescribed for her. Gabi doesn’t have time to talk and leaves. Kayla finds her password on the floor and questions it being there. Gabi has the results out in the park and says congratulations Chad you have a beautiful baby girl. Chad walks up and calls to Gabi.