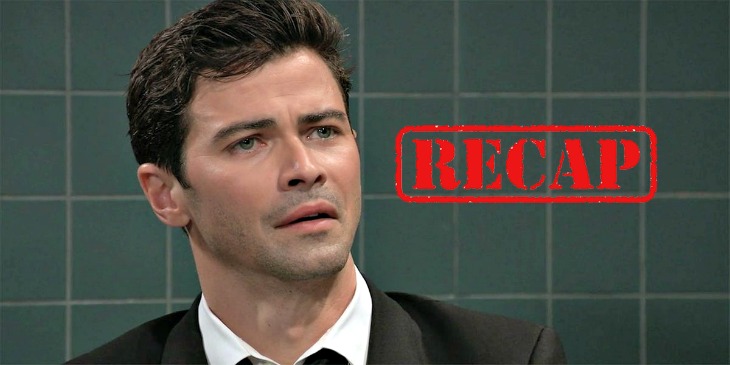 Sam Gets An Ex-husband’s Obituary

Sam's not letting a cold get her down, West Coast! But someone else might have another idea. A brand-new #GH starts RIGHT NOW on ABC! #GH55 pic.twitter.com/qqW2WvzpB4

Sam asks how Molly (Haley Pullos) is taking this since she and T.J. (Tajh Bellow) were so close to Kiki. Alexis wants to know what she can do for her daughters. Sam tells Alexis she needs her to be there. Alexis asks how things are with Jason; Sam brushes her off. Sam gets an obituary for Leland Powell. Alexis questions Sam about the obituary; he was one of Sam’s husbands.

General Hospital’s Alexis meets with Jordan (Briana Nicole Henry) and Margaux (Elizabeth Hendrickson) about Griffin. Alexis demands Griffin get in front of a judge promptly. Alexis threatens to go to the press. Jordan agrees with Alexis; she doesn’t believe Griffin did this either.

Margaux mentions the evidence against Griffin. Curtis (Donnell Turner) calls Jordan out of the room; he believes he has important information. Curtis goes back and speaks to Jordan; he doesn’t believe the killer is in the interrogation room, Jordan doesn’t either. Speaking to Sasha (Sophie Mattsson) has given them a new suspect.

Carly Is Stunned By Jason’s Confession

General Hospital’s Carly (Laura Wright) is on the phone with Michael (Chad Duell) talking about Kiki’s murder. Sonny (Maurice Benard) and Carly decide to make sure the nanny keeps the tv off until they get home. Sonny says he doesn’t like it, but they have to let Ava decide how to tell Avery about Kiki’s death. Sonny tells Carly that Griffin got arrested. Carly says that is impossible but brings up the fight the night before. Sonny tells Carly this doesn’t feel right. Jason arrives to speak to Sonny and Carly.

Jason tells them he spent Thanksgiving at Sam’s Carly asks for details, he refuses. Jason tells Sonny and Carly there was no warrant issued for Jeanette so Margaux didn’t turn her mother in for her father’s murder. Carly tells Jason this is another loss that Avery isn’t going to understand. Carly tells Jason they have arrested Griffin. Jason knows Griffin didn’t do this, Carly does as well.

Sonny Is Glad Morgan And Kiki Are Together

General Hospital’s Sonny goes to Morgan’s (ex-Bryan Craig) grave and apologizes for not coming sooner. Sonny tells Morgan he misses him and is always in his heart. Sonny tells himself Morgan is happy and safe and in a better place and Kiki is there too now. Sonny tells Morgan it wasn’t his time to die and it wasn’t Kiki’s time either. Sonny says the only consolation is that Morgan and Kiki are together and he asks that they take care of each other.

Griffin Tells Ava, She Can’t Take Anymore From Him

General Hospital’s Ava (Maura West) goes to the police station. Ava tells Griffin that Kiki had her whole life ahead of her, Griffin took Kiki’s life, she’s going to take his. Griffin tells Ava the truth will come out; he didn’t do this. He tells Ava she knows him, she says she thought she did. Ava brings up Kiki and Griffin’s night together. Ava says Kiki must have been so scared when he killed her, and she is going to make him pay.

Ava tells Griffin that he destroyed her relationship with Kiki. Ava blames Griffin for not getting the chance to make things right with Kiki. Ava says they would have found their way back to each other. Ava tells Griffin she will never hold or talk to her daughter again because of her. Griffin tells Ava if she needs someone to blame that badly pull the damn trigger. Griffin tells Ava she has taken everything else from him, go ahead and take his life too. Ryan (Jon Lindstrom) takes Ava home, and she pours a drink. Ava says if Griffin isn’t responsible for Kiki’s death who is? Ryan says “I am.”

General Hospital’s Julian (William DeVry) tells Ryan that Ava is taking justice into her own hands. Julian tells Ryan they need to get to the PCPD and stop her. Ryan and Julian enter the room at the PCPD, and Julian tries to talk Ava down. Ava asks Ryan what she should do. Ryan tells Ava she already knows what she has to do. Ava says this is what happens when you cross Ava Jerome.

Can Julian figure out where Ava's gone in time to stop her from doing something she'll regret? An all-new #GH STARTS NOW on ABC! @WilliamdeVry1#GH55 pic.twitter.com/t4IzQigoiP

Ryan tells Ava she will be hauled off and caged like an animal. Ava puts the gun down, and Ryan takes her in his arms. Julian hides the gun and Griffin covers for Ava. Julian has given his statement and asked if he can go. Chase (Josh Swickard) tells Julian to keep a tighter leash on Ava

Nina And Sasha Agree To Move In With Valentin

General Hospital’s Valentin (James Patrick Stuart) and Sasha are talking; she wants to leave the town. Valentin talks her out of leaving. Diane (Carolyn Hennesy) has instructed Sasha she doesn’t have to talk until Diane gets there. Jordan throws but Curtis and Nina (Michelle Stafford) out of the room. Nina tells Curtis she will remember what he has done to her.

The news of Kiki's murder has Nina concerned for Sasha. How far is she willing to go for her daughter? #GH is brand-new and STARTS NOW on ABC! #GH55 pic.twitter.com/z1PusmYzHD

Margaux and Jordan agree this changes things. Jordan gets a call from T.J. Margaux tells her to take it. Margaux thanks Curtis for bringing this forward, he did the right thing, he doesn’t feel good about it. Sasha cannot leave town, so both she and Nina agree to move in with Valentin until the trial is over.