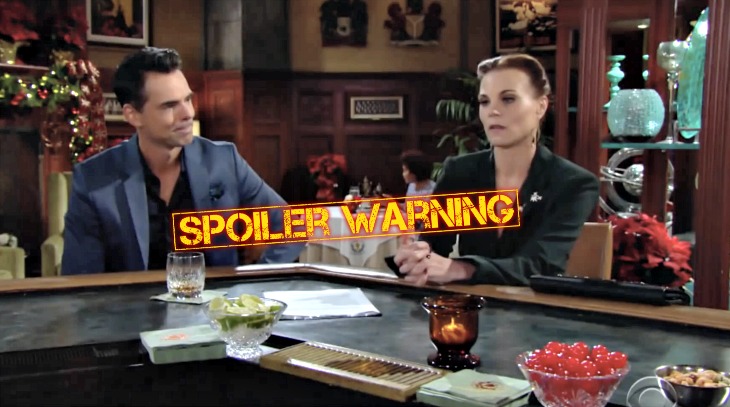 “Young and the Restless” (YR) spoilers for the week of Monday, December 3, 2018, through Friday, December 7, 2018 tease that “A missing person raises suspicion and will their love be revived.” We have a very exciting week heading our way and you will not want to miss a moment of the action!

In the newest CBS “The Young and the Restless” promo video we see Nikki Newman (Melody Thomas Scott) panicking thinking Victor Newman (Eric Braeden) is missing. Rey Rosales (Jordi Vilasuso) has found an oxford shirt with blood on it which makes matter worse.

The Young and The Restless Spoilers – Newman Family Under Attack

Nikki and Victoria Newman (Amelia Heinle) will come to the conclusion that the Newmans are under attack after they receive a call that the stables are on fire. They will not immediately suspect Tessa Porter (Cait Fairbanks) due to the fact they think it is beyond her skill set.

They will know how to figure out who is close enough to know the secret about J.T. Hellstrom (Thad Luckinbill) and what they want. Nikki’s problems will be far from over this week when she receives a chilling message reminding her of what she did to J.T. Do you Y&R fans think maybe J.T. survived and is the one taunting them? If not, who do you believe is behind it?

We will always have a place in our hearts for #Philly. 💔 #YR pic.twitter.com/YHk3TYRv2Y

Meanwhile, Billy Abbott (Jason Thompson) will confide in his brother, Jack Abbott (Peter Bergman) that he wants to reunite with Phyllis Summers (Gina Tognoni). After spending time with Phyllis working on a pitch Billy has realized that their connection was still there.

He thought he would never be able to get over the fact that Phyllis slept with Nick Newman (Joshua Morrow) but he knows they are a lot of unresolved business between them. What Billy and Phyllis have with one another has always been wild and spontaneous and her reaction to him wanting to reconcile will be no different. Phyllis will give Billy the shock of his life. Would you Y&R fans like to see Billy and Phyllis reunited?

Y&R Spoilers – For the other residents of Genoa City

Other “Young and Restless” spoilers suggest that Sharon McAvoy (Sharon Case) will cross the line. Devon Hamilton (Bryton James) will confide in Nate Hastings (Brooks Darnell). Nikki Newman will battle old demons. Cane Ashby (Daniel Goddard) will join forces with Victoria Newman. Jack Abbott romances Kerry Johnson (Alice Hunter). Arturo Rosales (Jason Canela) will defend Mia Rosales (Noemi Gonzalez). Nikki will walk into danger. As you can see we have a very eventful week coming up, so make sure to stay tuned to CBS’s “The Young and the Restless.”