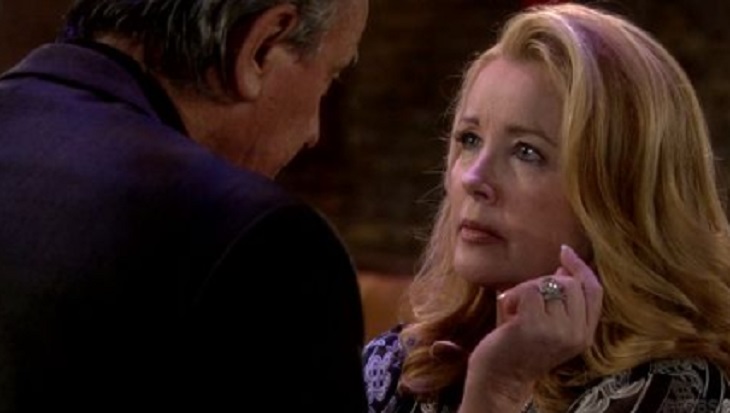 Young and the Restless (Y&R) spoilers tease that Eric Braeden confirmed that Victor will return to the show to save his on-screen wife, Nikki (Melody Thomas Scott) from danger. He’s been gone for quite a while but the big man will return on Monday, December 24.

Nikki may be acting like she’s in control with this Tessa (Cait Fairbanks) thing, but it’s clear she isn’t. Victoria (Amelia Heinle) and Nikki have been bullying Tessa and taking charge, in hopes not to involve Victor in the cleanup. They feared if he believed Nikki was in trouble, he’d take the blame to save her.

Even if Victor Newman is not reachable right now, Young and the Restless spoilers show Nikki is in deep trouble. Not only is this Tessa and JT (Thad Luckinbill) thing causing her a great deal of stress, it could compromise her sobriety. It’s pretty clear she is grappling with taking a drink to take the edge off.

As always, Victor will return to be her savior. Even if he doesn’t arrive in time to prevent her accident, he will return to be the person she will lean on for support. CBS SOAPS IN DEPTH reported that Nikki will fall off the wagon and take a drink, which will lead to a fall in the snow and a car accident. It sounds like she will have some family drama to deal with as they discover she decided to take a drink.

It’s official – The Young and the Restless has been the #1 daytime drama for 30 years, and that’s all because of YOU! 👏 We know how amazing the #YR fans are and want to thank each and every one of you for tuning in weekdays on @CBS. Our cast and crew ❤️ you! pic.twitter.com/adiCEshGDT

Young And Restless Spoilers – Victor To The Rescue

It’s likely that Victor will blame himself and he will believe if he wasn’t halfway around the world, Nikki wouldn’t be battling alcoholism again. Expect to see Noah Newman (Robert Adamson) as he comes to be there for his grandmother.

Do you think Victor will be able to “save” Nikki? Don’t forget to come back for more Young and the Restless (Y&R) spoilers, news, and casting updates!