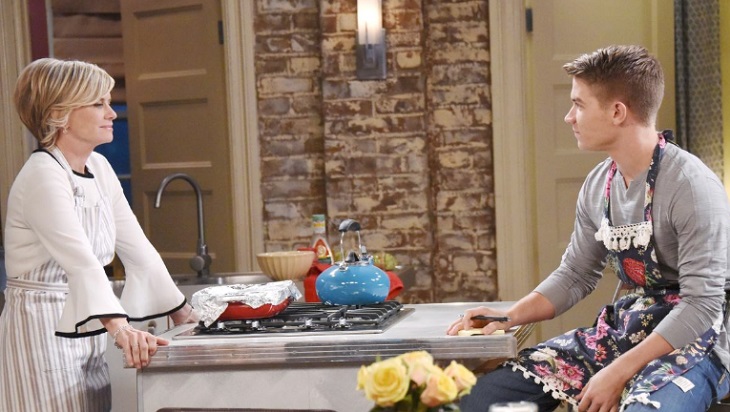 Days of Our Lives spoilers tease that Kayla Johnson (Mary Beth Evans) will soon break down and tell the truth about her husband Steven “Patch” Johnson (Stephen Nichols) to his son, Tripp Dalton (Lucas Adams). Tripp will try to comfort his stepmother, so this promises to be an emotional confession!

“Patch” had lost one eye in a knife fight with Bo Brady (most recently portrayed by Peter Reckell) years ago while in the Merchant Marine; which is how he got the nickname “Patch.” After many years of back and forth with Kayla, discovering he had a son with Ava Vitali (Tamara Braun) who turned out to be Tripp, and periods of disappearance where he was assumed dead, and in and out of mental hospitals.

Steve’s Heartbreak On Days of Our Lives

In March 2018 he went totally blind as a result of prolonged poisoning by John Black (Drake Hogestyn)! He, as well as John were formerly secret agents, working for the ISA. He was starting to mend fences and his relationship with Kayla, and had received sight in the form of bionic eyes.  Then Stefan DiMera (Tyler Christopher) set him up for espionage by using his bionic eyes to spy and record sensitive documents, which led to a prison sentence for Patch!

Steve and Tripp barely had time to get acquainted, let alone get to know each other well or form any kind of a father-son relationship. When Tripp found out Steve killed his birth mother Ava on ISA orders, he couldn’t handle it and cut ties with Steve immediately.

Later, Joey Johnson (most recently portrayed by James Lastovic) Steve and Kayla’s son confesses that he was the one who killed Ava, not their mutual father Steve! Steve and Tripp managed to make up after Joey’s confession, but their developing relationship has been interrupted by Steve’s incarceration.

Days of Our Lives #DOOL Spoilers: Julie’s Life Is On The Line @celebratesoaps https://t.co/etfUcW1zHN