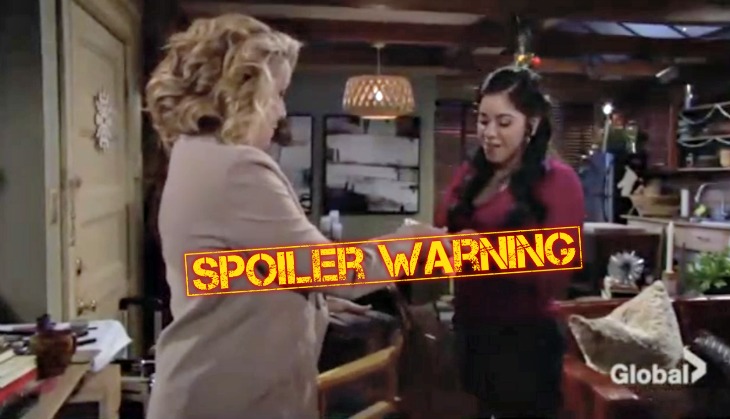 “Young and the Restless” spoilers for Thursday, December 13, tease that Victoria (Amelia Heinle) and Nikki (Melody Thomas Scott) will try to explain. At Victoria’s house, Reed (Tristan Lake Leabu) learns Victor’s (Eric Braeden) been set up and wants the real murderer to pay. Once they’re alone, Nikki and Victoria fret about what a disaster it’d be if Reed learned the truth.

Y&R Spoilers – Nikki Has A Plan

Talk turns to Rey (Jordi Vilasuso) and how they don’t want him talking to Reed. Nikki hints that she’s got a plan to convince Rey that Victor’s innocent. She vows to get started on it soon enough. Later, Nikki meets with Mia (Noemi Gonzalez) at her apartment and gets her makeup done. She suggests that if Rey weren’t so hung up on Victor’s guilt, she could help Mia make more GC connections.

Nikki ropes Mia into learning more info and hopefully shutting down Rey’s interest in Victor. In a moment alone, Nikki pours vodka in her coffee and downs it. Before she leaves, Nikki tells Mia that she has high hopes for their mutually beneficial relationship. Meanwhile, Victoria praises Reed for the growth in his maturity. He just wishes Cane (Daniel Goddard) could see the changes in him, too.

Victoria decides to intervene on Reed’s behalf, so she chats with Cane at Crimson Lights. She feels like Mattie (Lexie Stevenson) and Reed could use each other to lean on right now. Cane and Victoria discuss the challenges of being a single parent. She feels like Cane should make an effort to include joy in the twins’ lives, so he thrills them with a Christmas tree and ornaments later.

Back at home, Victoria gets the scoop on Nikki’s latest mission. She’s concerned that cozying up to Mia could be a massive mistake. Victoria warns that Nikki could make herself a suspect as well. Over with Mariah (Camryn Grimes), she arrives at the apartment to find Tessa (Cait Fairbanks) sleeping on the sofa. Tessa cries out from a nightmare, so Mariah wakes her up and wants to talk about the kidnapping.

Despite Mariah’s repeated attempts, Tessa insists it isn’t a good idea and leaves to get some air. When she gets back, she mentions that the athletic club is hiring. Tessa’s hoping to get a job there, but Mariah’s still stuck on the abduction. She can’t get over how upset Tessa was, so she plans to spill the story to Sharon and put the others in their place.

When you realize an all-new episode of #YR is about to start! 🙌 pic.twitter.com/sc44tW0u3r

Tessa finally reveals that Sharon was part of the kidnapping drama, which leaves Mariah livid. She refuses to accept the excuses Tessa makes for Sharon. Mariah snaps that Sharon just let them terrorize Tessa and that’s not going to work for her.

At Devon’s (Bryton James) penthouse, Abby (Melissa Ordway) makes sure Lola (Sasha Calle) stays out of sight during dinner. Ana (Loren Lott) and Devon thoroughly enjoy all the food, which Fen (Zach Tinker) serves. Before the night concludes, Fen hands over his demo to Devon and irks Abby as well as Lola. Nevertheless, the meal is a hit and Devon wants to make a deal.

After Devon asks to meet the chef, he’s taken aback to see it’s Lola. Devon realizes Abby tricked him and learns Lola wasn’t in the loop on the plan. Despite the deception, Lola and Devon are able to reach an agreement. They commit to being part of Abby’s project, so she’s absolutely ecstatic.

“The Young and the Restless” spoilers say some exciting scenes are ahead on the CBS soap. We’ll give you updates as other Y&R news and rumors emerge. Stay tuned to see what’s next in Genoa City.

Bold and the Beautiful Spoilers & Recap Wednesday, December 12: Steffy Continues To Assure Liam Taylor Is Not A Threat To Anyone