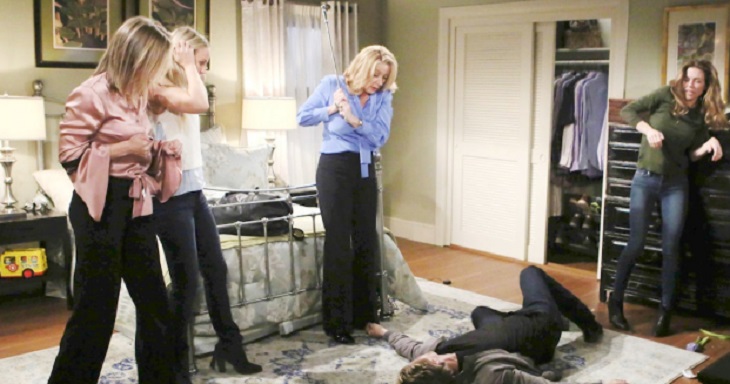 Four ladies worked together to unlawfully bury J.T. Hellstrom (Thad Luckinbill) on Young and the Restless. But which one somehow moved his dead body and hasn’t told the others?

Yes, the above poll question assumes that one member of the misguided and as yet unjailed quartet is withholding this information. Based on all interactions each character has had with the others, it also seems certain that two members, or a trio didn’t work together to unearth the now-missing man.

It’s okay if one chooses to disbelieve this theory. But surely some soap fans have been considering the four people referenced below as a suspect.

Victpria (Amelia Heinle) previously told Paul (Doug Davidson) that she helped J.T. escape Genoa City. J.T.’s suddenly ex-fiance told the then-Chief of Police (he still is that, right?) that she lied in her initial statement because she was afraid and embarrassed. Paul seemed to believe her, but Davidson’s later, seeming write-out from the show left this plot point open.

It would make sense to believe that Victoria felt she was protecting her mother, again. By moving J.T.’s body to whatever undisclosed location, or destroying it, she would have contained, or eliminated evidence that could put her mother in prison. Doing so would also protect Reed (Tristan Lake Leabu).

Nikki (Melody Thomas Scott) accidentally killed the guy in question. In order to save her own hide, Mrs. Newman returned to the scene of the burial crime, dug J.T. up and stored him in the Newman Ranch Stables, which she then paid a staff member to set on fire, or something to that effect. Scott’s character has the most to lose and thus her place as a lone suspect is plausible.

Phyllis (Gina Tognoni) feared Paul and Christine (Lauralee Bell), in particular, would be out for revenge, based on the ages-ago hit-and-run incident, if they learned she’d been involved in this mess. So, she took sole possession of J.T. and dumped him elsewhere. Phyllis has always been shifty and still is. She’s been suspiciously absent from recent coverup crew meetings as well. Sure, she could have done this.

Sharon (Sharon Case) makes the least sense. What would her motive be? She was the one who wanted to report what happened to the police and is working, closely, with Rey (Jordi Vilasuso) now. In all likelihood, Sharon didn’t do this, but anything is possible in this fictional Wisconsin town.

Fans of ‘The Young and the Restless’ rightfully express their opinions on a regular basis. So, if you had to pick one member of the coverup crew that moved J.T.’s body and has remained silent about it, who would that person be? Please vote in our poll below!

Days Of Our Lives Spoilers: Gabby Schemes To Run Away With Baby Charlotte – Will She Succeed?