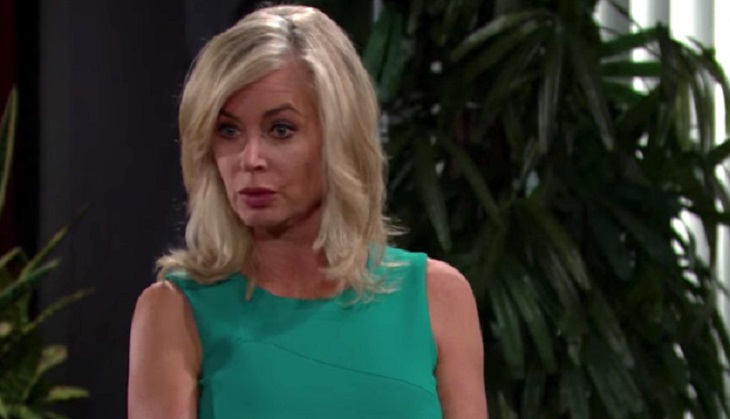 Ashley (Eileen Davidson) didn’t care about confidentiality on ‘The Young and the Restless’. She told Neil (Kristoff St. John) that Newman Enterprises was going to lose a major client. The Hamilton Winters Group co-owner pounced on that insider information, while also reestablishing a personal connection with the lady who’s just returned to Jabot.

Victor (Eric Braeden) was not pleased when he confirmed that the server farm he contracted with severed ties with Newman. The decision was made in response to health information that was publicly leaked about the ‘Moustache’ in order to damage the company and Victor’s reputation.

An ongoing series of defamatory measures are being taken against Newman Enterprises in an open attempt to bring down the conglomerate. Victor is convinced that J.T. (Thad Luckinbill) is behind this effort, which is natural because that character, or someone pretending to be him, contacted Victor about meeting face-to-face.

Ashley’s return to Newman was surprising. It also was short-lived. The breaking point came when she asked Victor for a straight story regarding J.T.’s disappearance. The ‘Black Knight’ refused to tell his former wife and then-top executive anything, which resulted in her instant resignation.

Neil was happy that Ashley confided in him. He took that intel and quickly made a deal with the server farm that had been working with Newman. Doing so allowed HWG to gain a strategically important client, but there was a connected business consequence.

Victor arrived at Adam’s (Justin Hartley) former penthouse, that Neil recently purchased. The ‘Moustache’ saw that Ashley was there and then questioned his one-time Newman executive, Neil.

Power Communications, HWG’s public relations arm, head attempted to mix logic with emotion. Neil told Victor that he’d simply made a business move, which Victor surely would have done himself if he had the opportunity, and had just told Ashley that he considered Victor to be a mentor and a friend.

Victor didn’t care about Neil’s words and told him that HWG was no longer working for Newman Enterprises. So, one of this mogul’s last remaining friends has now been cut off.