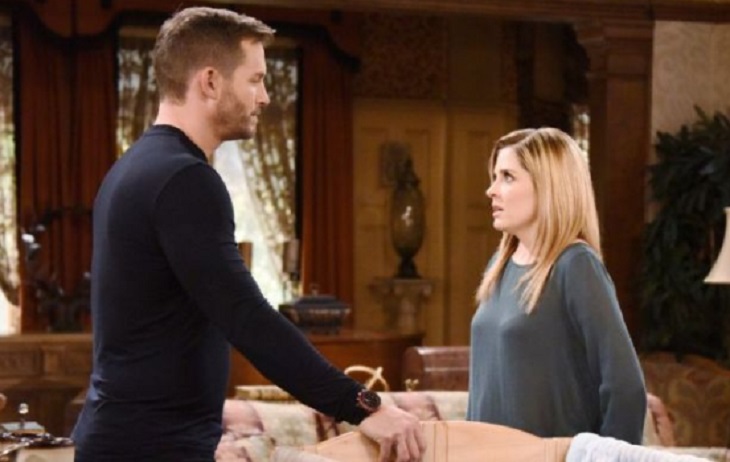 Days of Our Lives spoilers reveal that Child Protective Services found drugs in J.J.’s (Casey Moss) apartment, and rumor is Theresa (Jen Lilley) loses custody.  Brady (Eric Martsolf) has the suspicion of murder hanging over his head, so  Tate (Colin and Kyle Schroeder) could be taken from both.

Eve Went To Victor For Help

Eve (Kassie DiPaiva) asked Victor (John Aniston) to help protect Brady and Nicole’s (Arianne Zucker) confession tape.  Apparently, Victor has betrayed Theresa and had drugs planted in J.J.’s apartment.  Child protective services report their find to the judge and Theresa loses all hope of custody of Tate.  Victor was trying to help keep Brady out of prison, however, has he again succeeded to make things worse?

Ted Has Exposed Brady As Suspect In A Murder

Ted (Gilles Marini) brought up Eve’s accusation of Brady in Deimos’ (Vincent Irizarry) murder. Brady also admitted in open court to framing Eve. Brady, Eve, and Victor all know that Nicole is the murderer.  Brady refuses to turn Nicole in because he blackmailed her into leaving town.

This leaves Brady open to being charged and prosecuted for murder.  As a suspect in a murder case, the judge is going to see Brady as a threat to Tate as well.  If Brady is arrested for murder and Theresa is proven unfit, Tate could be placed with someone else.

Nicole Could Be Brady’s Only Hope

Fans will remember that Xander (Paul Telfer) stole the taped confession that Eve was so desperate to get her hands on. With no evidence, and the knowledge that Brady had the medallion could easily get him convicted of murder.

Nicole knows what it is like to be separated from her child, she could save Brady from that fate by confessing.  Brady, however, forced Nicole to leave Eric (Greg Vaughan), the man she loves and leaves town.  Does Nicole care enough about Brady to come back to Salem and risk losing her daughter to save Brady?  Most people in Nicole’s position would not bother, however, she is returning to Salem for some reason.

Could it simply be that Xander turns the tape over to the authorities and Nicole is arrested?  Could Chloe (Nadia Bjorlin) contact Nicole and plead Brady’s case with her?  Could Victor force Nicole to come back to Salem?

Arianne Zucker’s return as Nicole will certainly have Salem residents at attention.  Eric is in a budding romance with Jennifer again, Nicole’s return is sure to shake up that pairing. Nicole also has to power to keep Brady and his son together, but will she?