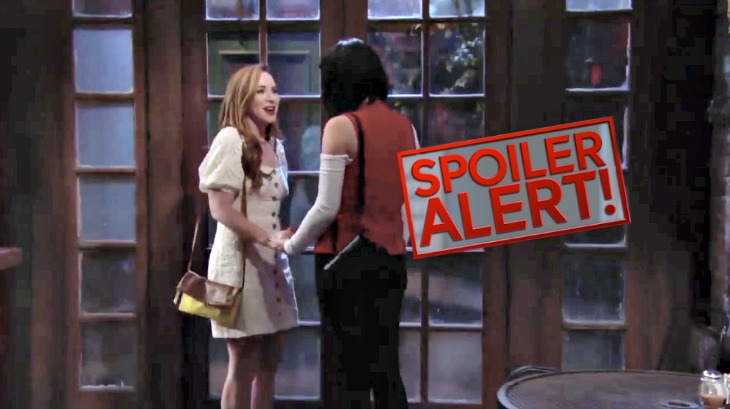 The Young and the Restless spoilers indicate that Mariah and Tessa’s romance is once again going to heat up. That is, if Mariah feels the same way about Tessa and hopefully sharing a future together.

Cait Fairbanks, who plays Tessa on the hit show, recently told CBS Soaps in Depth, “They’ve fallen back into their old rhythm but it’s still not quite the same. Wounds are still a little tender, so Tessa is tiptoeing around to see how things go between them, but I think they’re both ready to let their guard down. They’re just waiting for one person to say, ‘Everything’s forgiven and we need to move on.’ Tessa is hoping that it’s moving forward together, but they have to forget the unpleasant stuff that happened between them.”

Just when things are running pretty smoothly, Tessa’s cell phone rings. It’s a mysterious person on the other end of the phone, which of course has Mariah worried.

Cait adds, “Tessa will always be mysterious: I think it’s my black hair. For Tessa, romantic relationships were never a priority, so there always be personal situations that will interfere.”

Despite their issues from the past, Tessa wants Mariah to know that she’s serious. They share a vulnerable moment between them, but Tessa still wants to show Mariah just how much she cares about her. Now, whether or not Mariah will reciprocate, remains to be seen. For all Tessa knows, that part of the relationship could already be gone.

The Young and The Restless Spoilers: Phyllis’ New Nightmare Revealed