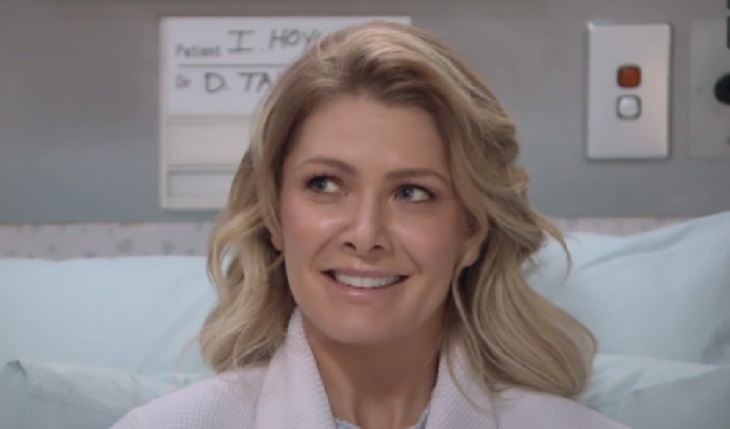 Man eater Izzy Hoyland sets her sight on a new man next week – but is all as it seems?

Neighbours’ Izzy certainly hasn’t given up her scheming ways, as fans saw when she dropped that baby bombshell this week.

Karl was totally shocked that Izzy wanted to have another baby with him. It wasn’t about getting him back though- she hopes that Holly can have a biological sibling. It straight away looked like he was going to say no, until she told him that the donation to the hospital is solely dependent on his answer. However, he ultimately turned Izzy down, deciding to focus on his marriage to Susan instead.

After feeling rejected, Izzy will do whatever she can to make Karl jealous. For this reason she targets Mark to be a part of her game, seeing that he is vulnerable. Luring him up to her hotel room, she sets up a situation where Karl finds them in bed together.

Luckily, Karl knows Izzy well enough by now and sees straight through her devious plan. When he walks off unimpressed and unfooled, Izzy has to quickly think of another solution. It’s perhaps her most shocking decision yet… she steals Karl’s sperm.

Now, it’s not exactly something you leave lying around, so she has to steal one of his samples from the hospital.

Izzy thinks she’s got away with it, but Holly soon looks through her mother’s handbag and sees her father’s sperm (only in soapland!) Holly is disgusted and immediately sides with her father, vowing to tell Karl and Susan what she has done.

Ultimately she cannot betray her mother, but puts pressure on Izzy to donate to the hospital wing despite Karl rejecting her offer. Realising that Holly will only stay quiet if she does, Izzy agrees and makes the large donation.

The Young and the Restless (YR) Spoilers: J.T. Endangers His Life and Family – Paul and Chris Don’t Care