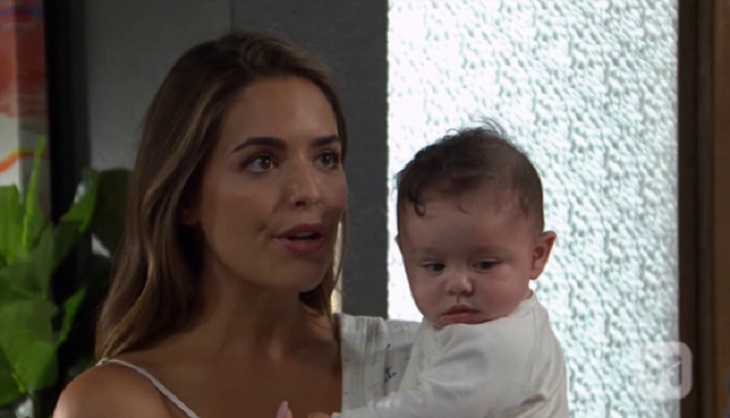 Baby Gabe’s misfortune continues on Neighbours next week when Mark Brennan puts his life in danger.

Neighbours hunk Mark faces huge consequences next week, as well as the wrath of both Paige Smith and Jack Callahan, after he accidentally puts Gabe in life threatening danger.

As is the problem with living in a small suburb, only a week or so after they split up, Mark inadvertently ends up spending the afternoon with Paige. Jack is also spending time with them, so of course with all the testosterone brewing the outing is going to end in disaster.

This disaster occurs when Yashvi asks Jack, Toadie and Mark to help her train for Aussie Rules. It is a perfectly innocent request from Yashvi (for once), as she has no idea about the tension between Mark and Jack.

Paige sees that Mark is still hurting and so when she gets a chance she asks him how he is and how he is coping. Rather than being thankful for her concern, Mark believes Paige is being condescending and quickly becomes frustrated.

Instead of letting his anger get the better of him, he decides it would be better to take it out on the ball – or so he thinks. In his frustration Mark blasts the ball towards Jack but it ends up hitting Gabe’s pram instead. The force of the kick sends the pram flying backwards with Gabe still in it!

Paige and Jack are horrified, but thankfully Gabe is quickly pulled out of the water unhurt. Mark is disgusted that he let his anger get the better of him and knows he has to face the consequences. Paige is absolutely raging, and understandably goes off at Mark.

Will she ever be able to forgive him – will they ever be friends?

Tune into Neighbours on Friday 9th March to watch how these scenes unfold.