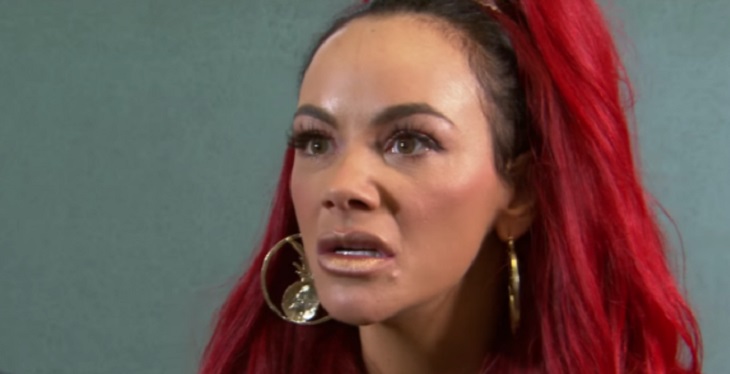 Hollyoaks fans will be happy to learn that Chelsee Healey reprises her role of Goldie McQueen on February 1. And as loyal viewers know, Goldie’s return can’t come soon enough given the bedraggled state of her family.

Let’s start by dishing that Goldie makes a spectacular entrance, one that her son Prince (Malique Thompson-Dwyer) won’t soon forget!

We last saw Goldie on Hollyoaks when she and Mercedes McQueen (Jennifer Metcalfe) took off together. Since that time a lot has happened in Goldie’s world. First off her bad boy baby daddy Shane Sweeney (Michael Salami) was presumed dead after a plunge from a cliff. Well, he was left for dead anyway, but lo and behold his body disappeared, making for an eventual soap-tastic return from the dead scenario.

Their kids Prince and Hunter (Theo Graham) endured the whole ordeal, and now Shane’s back in town ruffling feathers again.

As if that weren’t enough, Goldie must get up to speed on her boys’ antics on Hollyoaks. Poor teenage Hunter got involved with his high school teacher, a union that wasn’t meant to last. Duh!

Nonetheless, it was super tragic for Hunter when his lover passed away, killed at the hands of her vengeful partner.

Then there’s Prince, who’s juggling a busy romantic life as well. He’s involved with Lily Drinkwell (Lauren McQueen) and they want to get married.

Not so fast! Complicating matters between Prince and Lily is the fact that Peri Lomax (Ruby O’Donnell) says she’s pregnant with a Prince-in-Waiting.

Desperate to hold onto her man, the vixen has resorted to using an old ultrasound pic to convince the lad that he’s about to be a dad.

When he sees the pic he’ll be bowled over with joy at the prospect; but he’s not the only one who gets an eyeful.

That’s because Goldie will make her grand Hollyoaks entrance as her son peers at the pic. Will the savvy lady be able to ferret out the truth?

Stay tuned folks, Goldie’s back in town and Hollyoaks just got a whole lot more intriguing!

The Young And The Restless News: Max Page Preparing For Heart Surgery