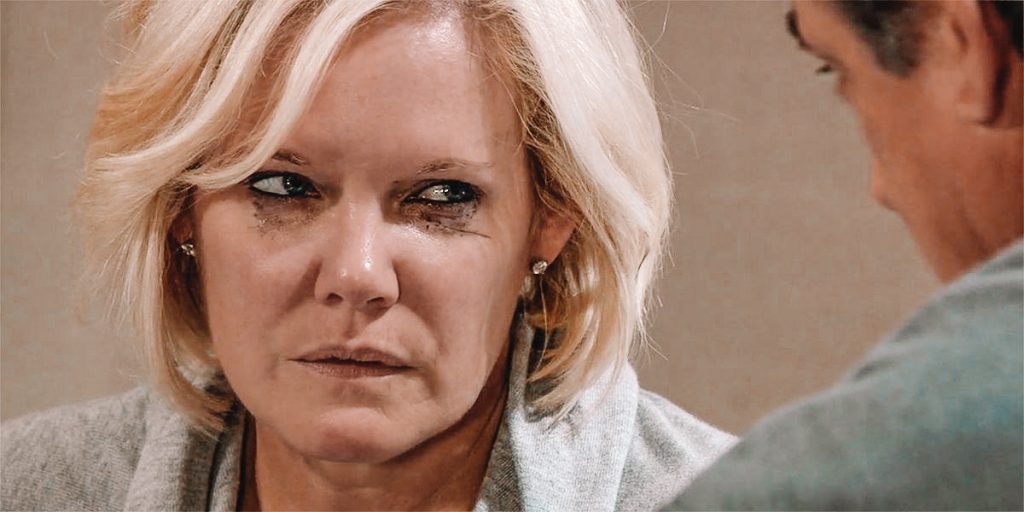 General Hospital (GH) spoilers reveal Kiki Jerome’s (Hayley Erin) horrific death has rocked Port Charles to its very core; but hasn’t affected anyone quite like her mother, Ava Jerome (Maura West)! Ava and Kiki were not on the best of terms when she was murdered, but that doesn’t mean mob princess and vindictive Ava is not going to seek vengeance for her “baby girl”!

GH sources tease Ava marches over to the PCPD once she discovers her former boyfriend and Kiki’s current lover, Dr. Griffin Munro (Matt Cohen) has been arrested on suspicion of her death. She had zero qualms walking in with a loaded gun into the interrogation room, threatening on making Griffin pay for what he has done; she is completely irrational, full of guilt, anger, and grief, but has she just placed the target on her back?

What Ava isn’t aware of is Sasha Gilmore (Sofia Mattsson) is also being interviewed, revealing all the sinister details of what Ava did to her and Griffin; drugging her and making it seem like they slept together, only to seek revenge on her own daughter Kiki. Ava needs to watch her back now because she is tied not just to Kiki’s murder but also to Mary Pat’s (Patricia Bethune); whose body conveniently turned up at her Art Gallery.

General Hospital spoilers reveal Ryan Chamberlain (Jon Lindstrom) plays a key role in all of this. Viewers of the ABC soap opera, know he is the murderer, but he thought he was doing this to please Ava, but her reaction tells him otherwise. He cannot understand her pain, but will remain by her side as he knows to be a fantastic psychiatrist under his brother, Kevin’s reputation; he will be above reproach and never be suspected.

The only person who should fear for anything is Griffin because Ava is unhinged and reckless; she has lost her child and will do anything to ease her pain. We have seen what she has done to Morgan Corinthos (Bryan Craig) when she didn’t want him going back to Kiki. She is cold and calculating, there is no telling what Ava will do next!

Be sure to tune into ABC’s General Hospital (GH) to catch up on everything happening in Port Charles right now, especially the fallout from Kiki’s tragic death. Check Soap Opera Spy often for updates, news, rumors and spoilers!