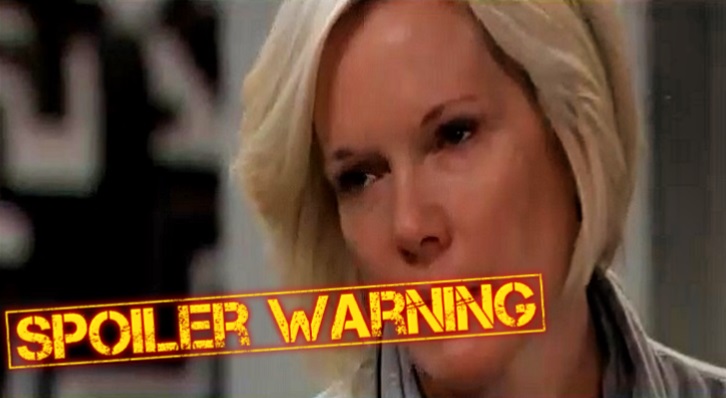 “General Hospital” spoilers for Tuesday, December 4, tease that Ava (Maura West) will be perplexed by Ryan’s (John Lindstrom) bold admission. He just confessed to killing Kiki (Haley Erin), but she won’t see how that could possibly be true. Ava assumes this is the kind and helpful Dr. Kevin Collins (Jon Lindstrom), so it’s understandable that she would have doubts.

Nevertheless, “Kevin” will repeat that he’s responsible and leave Ava wondering what’s up. Of course, GH isn’t going to bring this story to a screeching halt with an actual admission. They’ve got so much more to explore!

Instead, Ryan will likely blame himself for not trying to reunite Kiki and Ava. He might suggest that if he had, Ava could’ve spent Thanksgiving with her daughter and been able to save her. Ryan isn’t really remorseful, but he has to play the part here. Whatever will keep him close to Ava should suit him just fine.

Other “General Hospital” spoilers say Finn (Michael Easton) and Anna (Finola Hughes) will get an earful. Their plans will annoy Epiphany (Sonya Eddy) at GH, so they’d better be prepared for some stern advice. Speaking of stern advice, Mac (John J. York) will deliver some to Peter (Wes Ramsey). He’ll sense that Peter’s growing closer to Maxie (Kirsten Storms), so he’ll want to get a few things straight.

Mac will warn Peter to be careful with Maxie’s tender heart. She’s been through a lot, so Peter needs to be gentle. Mac will suggest that if Peter doesn’t cooperate, he’ll make his “life a living hell.” It’s safe to say Peter will get the message!

Meanwhile, Maxie will open up to Felicia (Kristina Wagner). She’ll admit she shared a moment with Peter after Jordan (Briana Nicole Henry) and Curtis’ (Donnell Turner) wedding, but it really left her rattled. Maxie will believe it’s too soon to have feelings for someone else. She loved Nathan (Ryan Paevey) with all her heart, so she won’t want to feel like she’s betraying him.

Felicia will get where Maxie’s coming from, but she may point out that it’s OK to let go. Nathan would never want Maxie to stop herself from loving again. Elsewhere, Margaux (Elizabeth Hendrickson) will let Sonny know she’s got her eye on him. One wrong move and Sonny will face Margaux’s wrath like before. He’ll do his best to calm Margaux down and help both of them avoid a bigger mess.

Finally, Griffin (Matt Cohen) will tell Jordan and Chase (Josh Swickard) about Ava’s (Maura West) crazy plot. Sasha (Sofia Mattsson) spilled the beans, so Griffin will have no choice but to share his side of the story. Jordan will see that Ava might’ve had a motive to kill Kiki, but she just won’t buy it. She’ll suspect there’s something they’re missing, so she’ll keep digging for answers.

“General Hospital” fans won’t want to miss all Tuesday’s action. We’ll give you updates as other news and rumors emerge. Stick with ABC’s GH and don’t forget to check Soap Opera Spy often for the latest “General Hospital” spoilers, rumors, updates and news.