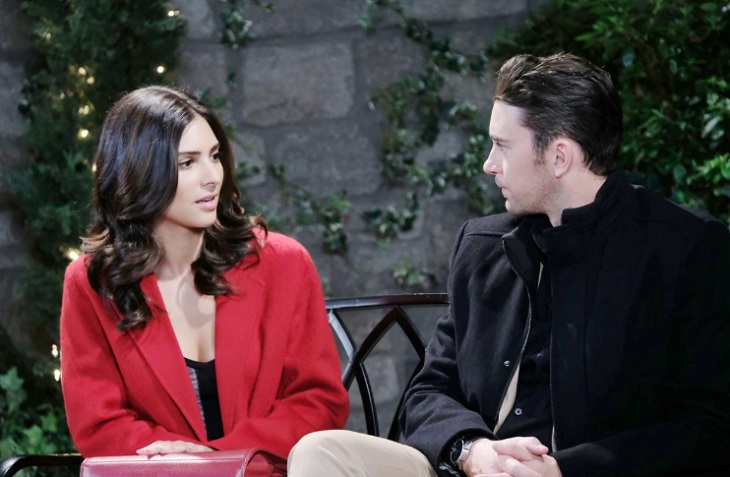 “Days of Our Lives” spoilers for Tuesday, December 4, tease that Gabi (Camila Banus) could raise a few more suspicions. After swiping the original paternity test results, Gabi was examining them when Chad appeared. He may wonder what she’s up to, but Gabi will undoubtedly hide the contents of the document and keep her lies going a little longer. She’s desperate to stay in control of her scheme.

Speaking of schemes, Kate’s (Lauren Koslow) sexual harassment plot has really blown up in her face. “Days” spoilers say Kate will offer Sonny an apology, but he’ll still have a major meltdown. “I’m sorry” isn’t good enough when Sonny’s whole world has fallen apart. He’ll tell Kate that she ruined his life and needs to go down for it.

Later, Leo (Greg Rikaart) will drop another serious bomb. “Days of Our Lives” spoilers state that he’ll have some incriminating proof, so this means more trouble for Sonny and Will. They’ll try to stay strong, but it’ll become crystal clear that Leo’s in control right now.

Meanwhile, Rafe (Galen Gering) will worry about Hope’s (Kristian Alfonso) deception. He can tell she’s keeping some secrets, but he doesn’t know the reason for them just yet. After Rafe opens up to Eli (Lamon Archey), he’ll have to face an idea he doesn’t want to consider. Eli will suggest that Hope might be cheating behind Rafe’s back.

Rafe won’t want to think Hope has betrayed him, but the thought has likely crossed his mind. After the whole Sami (Alison Sweeney) sex fiasco, Rafe may fear that Hope retaliated or at least never felt the same about him again. DOOL fans know Hope is actually working with Ted (Gilles Marini), but this partnership will turn into a real mess before the truth comes out.

Other “Days of Our Lives” spoilers say Stefan (Tyler Christopher) will wonder what to do. Should he take a chance on “Gabby,” even when he’s not sure he buys Abigail’s (Kate Mansi) claims? Ben (Robert Scott Wilson) will weigh in on the matter, so Stefan will have some help as he makes his choice. Abigail is indeed lying, but Stefan will end up scoring her release later this week.

Days Of Our Lives Star Linsey Godfrey Reveals New Love In Her Lifehttps://t.co/xQC8nWUTzo

It sounds like some hot drama’s ahead in Salem. We’ll give you updates as other “Days” news and rumors emerge. Stick with DOOL and don’t forget to check Soap Opera Spy often for the latest “Days of Our Lives” spoilers, rumors, updates and news.

Bold and the Beautiful Spoilers & Recap Monday, December 3: Bill Reassures Liam Taylor Is Not A Threat