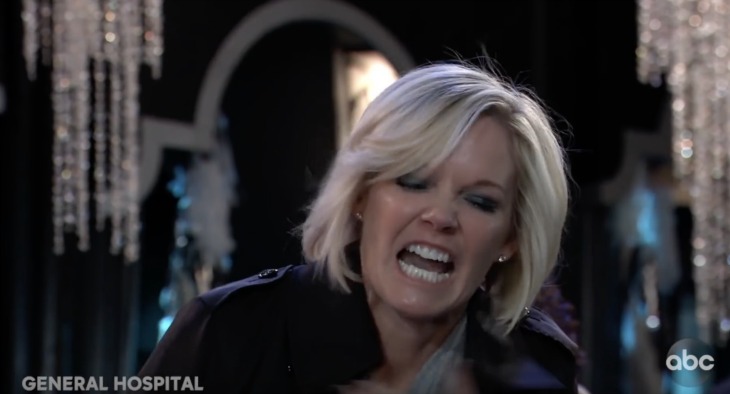 General Hospital (GH) spoilers for the week of Monday, December 3, 2018, through Friday, December 7, 2018 tease that we will have a week filled with weddings postponed, one out for blood, and let’s not forget plenty of drama. We have a very exciting week heading our way and you will not want to miss a moment of the action!

This week, Elizabeth Webber (Rebecca Herbst) and Franco Baldwin (Roger Howarth) will decide to postpone their wedding due to Kiki Jerome (Hayley Erin) being murdered. Kiki was more like a daughter to Franco and he will be very devastated and shaken. We recently saw Scott Baldwin (Kin Shriner) deliver the news to Franco and he is not handling it well at all.

Elizabeth and Franco will agree that right now is not the time to ask people to come together for a wedding. The writers tease that there is no reason for “Friz” fans to panic because there will be a wedding and the right time will present itself later. Do you think they made the right decision?

TODAY ON #GH… Griffin finds himself on the wrong side of the PCPD. Plus, Oscar starts the drug trial and Jason gets an unexpected wake-up call. Don't miss it! #GH55 #GeneralHospital

Meanwhile, Ava Jerome (Maura West) will be out for blood after her daughter was murdered. Ava will reach her breaking point after losing Kiki Jerome and will do whatever it takes to avenge her death. As we all know Griffin Munro (Matt Cohen) is being set up for Kiki’s murder and Ava will pay him a visit at the precinct and it will not be nice. Ava will pull out a gun on Griffin in the interrogation room and he will try to plead his innocence to her.

Ava has no idea that the man she has been cozying up to is actually the one responsible. How far do you GH fans think Ava will go to get vengeance? Are you happy to see Ava’s ruthless side coming back out? Maura West has really been killing these scenes. Do you fans agree?

GH Spoilers – For The Other Residents Of Port Charles …

For the other residents of Port Charles, Griffin Munro pleads his case. Sam McCall (Kelly Monaco) will be in for a pleasant surprise. Chase Harrison (Josh Swickard) will find a clue. Sonny Corinthos (Maurice Benard) will have a run-in with Margaux Dawson (Elizabeth Hendrickson). Anna Devane (Finola Hughes) will get a surprise. Julian Jerome (William DeVry) will lash out.

Nina Reeves Cassadine (Michelle Stafford) will make a move. Jordan Ashford (Briana Nicole Henry) will become obsessed over a case. Sam will have something important for Alexis Davis (Nancy Lee Grahn). As you can see we have a very eventful week coming up, so make sure to stay tuned to ABC’s General Hospital.