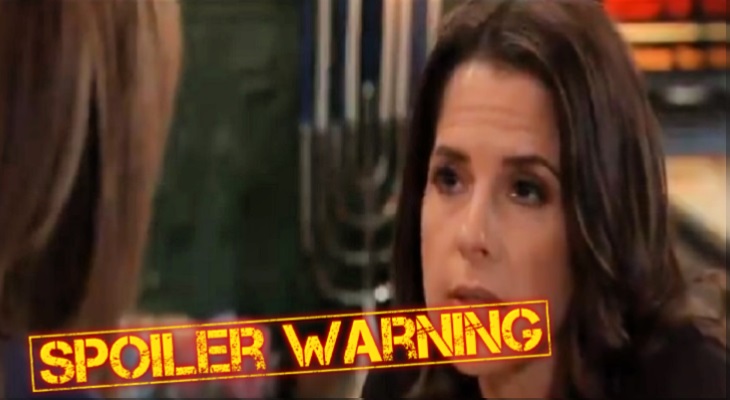 “General Hospital” spoilers for Thursday, December 6, tease that Willow (Katelyn MacMullen) will share some warm moments with Michael (Chad Duell).  Chase (Josh Swickard) has been flirting hard, so he’s hoping things will go somewhere with Willow.  However, Michael appears to be the man who’s capturing Willow’s heart.  They’ve been connecting over their losses and will continue to do so.

Once their bereavement group meeting concludes, Willow will stop Michael from leaving.  She’ll ask for his help with something, so he’ll pitch in however he can.  While Willow and Michael bond, Curtis (Donnell Turner) and Jordan (Briana Nicole Henry) will celebrate.  They had to take a raincheck on some wedding night bliss, but they’ll finally get their shot at it in Thursday’s episode.

Of course, Jordan won’t be able to leave work at the door.  She’ll end up mulling over the deadly chaos in town, so Curtis will weigh in.  He’ll agree that Kiki’s (Hayley Erin) case is too clear-cut.  Evidence that’s too good to be true usually is.  Jordan will have to take a closer look at the facts and put her thinking cap on.

In the meantime, Griffin (Matt Cohen) will continue to proclaim his innocence.  Chase just found out that the killer used a special method so there wouldn’t be much blood.  He may think Griffin had the knowhow, but Griffin will insist he’s not to blame.  He loved Kiki and would never hurt her.  Besides, if Griffin was smart enough to do that technique, why would he leave the bloody knife right in his closet?

Fortunately, some new evidence will surface thanks to Sam (Kelly Monaco).  She’ll sit down with Alexis (Nancy Lee Grahn) and fill her in on her plan.  Sam will think she has something that’ll prove Griffin’s innocence.  Based on upcoming “General Hospital” spoilers, it looks like Sam’s right!

Over with Ryan (Jon Lindstrom), he’ll rip into Laura (Genie Francis) like never before.  Perhaps Laura will dare to trash-talk Ryan’s beloved Ava (Maura West).  Regardless, Ryan won’t tolerate statements like the one Laura’s making.  He’ll snap that if she tries it again, it’ll be the last thing she ever says to him.

Other GH spoilers state that Liesl Obrecht (Kathleen Gati) will find herself cornered in Cuba.  Finn (Michael Easton) and Anna (Finola Hughes) will definitely catch Dr. O off guard.  Liesl will fume over their sneaky plan, so “General Hospital” fans can expect a fierce confrontation.

It sounds like another fantastic episode’s on the way.  We’ll give you updates as other news and rumors emerge.  Stick with ABC’s GH and don’t forget to check Soap Opera Spy often for the latest “General Hospital” spoilers, rumors, updates and news.