General Hospital Spoilers & Recap December 4: Ryan Give Himself And Ava An Alibi 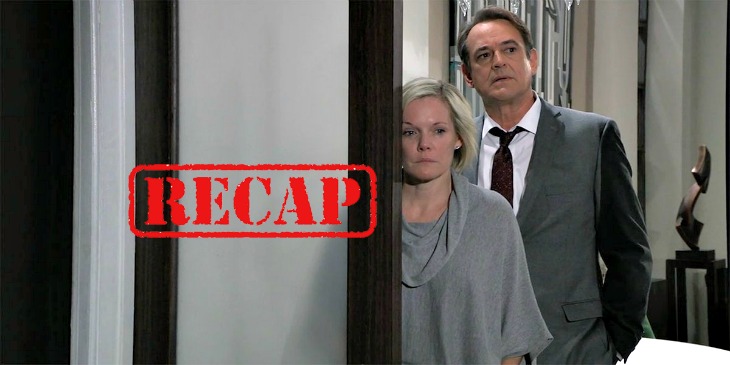 General Hospital (GH) recap for Tuesday, December 4, 2018, reveals Felicia (Kristina Wagner) and Mac (John J. York) arrive at Maxie’s (Kirsten Storms) and are talking about Kiki’s (ex-Hayley Erin) murder. Felicia knocks on the door, and Maxie says come in, Peter (Wes Ramsey) is there, and Maxie is giving him a massage.

Mac and Felicia didn’t realize Maxie had company, Maxie tells them Peter stayed in the hallway all night because he was worried about her and James. Mac warns Peter against hurting Maxie; he will make his life a living hell if he does. Mac tells Peter this isn’t easy, he is family and is stuck with them whether things work out with Maxie or not. Peter tells them he and Maxie are working their way back toward friendship.

Mac tells Peter to proceed with caution. Felicia tells Maxie it seems she and Peter are getting closer. Maxie finds her relationship with Peter to be disoriented. Maxie thinks it is too soon to have feelings for someone else. Felicia tells Maxie that Nathan would want her to be happy and it is ok to take the next step. Maxie is going through decorations and finds Peter’s cufflinks. Peter arrives and Maxie thanks him for watching over her last night. Maxie wants to take him to dinner some time. Maxie will call or text him; Peter will be free whatever night she chooses.

General Hospital’s Finn (Michael Easton) and Anna (Finola Hughes) talk about someone to babysit Roxie. Finn doesn’t know who would kill Kiki. Anna tells Finn she knows Griffin is innocent. Anna is going after Liesl (Kathleen Gati) to protect her son and advises Finn to meet Hayden (ex-Rebecca Budig). Epiphany (Sonya Eddy) tells Anna that isn’t what she needs to be doing.

WATCH: Anna's stance on whether or not Finn flies to Rome to meet Hayden has Epiphany's blood boiling. @TheRealSonyaEd @finolahughes #GH55 pic.twitter.com/CdswTv2ZoI

Epiphany pulls Anna aside and tells her she needs to get it together before it is too late. Epiphany tells Anna she was there for Finn and Hayden and they decided it was over. Epiphany advises Anna to let Finn make his own decision where he wants to go; Anna goes on to Havanna without Finn. Finn joins Anna on the plane; he was only going to see Hayden because of her, he has nothing else to say to Hayden. Finn tells Anna he loves her, she loves him too, they kiss.

General Hospital’s Margaux (Elizabeth Hendrickson) comes upon Sonny (Maurice Benard) at Morgan’s (ex-Bryan Craig) grave; Sonny asks if she’s there to see her father. Sonny asks Margaux how long she has been standing there, she tells him long enough to see how much he misses his son and tells Sonny he does have a heart. Sonny brings up the fact that Margaux didn’t have Jeanette (Ely Pouget) arrested. Margaux is mad at her mother, but she wants Sonny not her mother punished.

How sturdy is Margaux's truce with Sonny, West Coast? Because they're both ready to test the waters. A brand-new #GH STARTS NOW on ABC! #GH55 pic.twitter.com/SzUBfnj4jf

Sonny tells Margaux he has made some bad choices out of grief. Sonny happens that Margaux is off that vengeance road. Margaux tells Sonny one wrong move, and she will be after him. Sonny tells Margaux he understands her pain and is sorry that she had to feel that because he lost his father too, just not to death. Margaux doesn’t understand how Sonny could be such a bastard and says something like that to her and mean it. Sonny put a scarf on Margaux and leaves. Margaux talks to her father; she can let this consume her for the rest of her life or let it go. Margaux tells him its time, and she loves him even though she never knew him. Margaux tells her dad to rest in peace and walks away.

General Hospital Ryan Give Himself And Ava An Alibi

General Hospital’s Ava (Maura West) believes Griffin (Matt Cohen) when he says he didn’t kill Kiki but wonders if she can trust her instincts. Ryan (Jon Lindstrom) tells her he is responsible; Ava asks how, he didn’t kill Kiki, Ryan says he did. Ryan tells Ava he doesn’t mean. He encouraged Ava to explore her feelings so therefore he blames himself. Ryan thought he was helping to let Ava vent. Ava asks Ryan if this was the advice if he would be giving her if Kiki were alive. Ryan tells Ava she needs to forgive herself, Ava doesn’t have the strength.

Ryan vows not to leave Ava’s side until she is. Ryan vows to stay with Ava until she feels better about her decision. Ryan points out that even Griffin covered for Ava holding a gun on him at the PCPD. Chase (Josh Swickard) and Jordan (Briana Nicole Henry) arrive at Ava’s to ask her a few questions. Ava tries to throw Jordan and Chase out of her apartment. Chase says no, you just knocked out her boyfriend and drugged her half-sister, where were you yesterday.

Ava is vulnerable… and Ryan knows it. What is his plan for her? Tune into a thrilling, new #GH – STARTING NOW on ABC! @MauraWest @thejonlindstrom pic.twitter.com/rX1qJD7yM6

Ryan tells Jordan and Chase that he was with Ava the whole time. Ryan tells them that Laura found he and Ava in a compromising position and they came to her apartment. Jordan asks he they were together the whole time, Ava and Ryan say they were. Jordan and Chase leave, Ava tells Ryan there was a large chunk of time that they weren’t together and asked why he lied to the cops. Ryan tells Ava he lied because he knows she is innocent. Ava asks Ryan how he can be so sure, Ryan says he believes in Ava. Ava doesn’t know how she would be standing without Ryan.

Chase and Jordan think Ava might have killed Kiki; Griffin tells them she wouldn’t do that. Sonny shows up to see Griffin at the PCPD and asks how he is. Sonny tells Griffin he knows how he feels. Sonny tells Griffin how much he thought of Kiki. Griffin asks about Avery (Ava and Grace Scarola); Sonny tells him they are waiting on Ava to tell her. Sonny offers to get Diane (Carolyn Hennesy) to represent Griffin; he tells him he has Alexis (Nancy Lee Grahn). Griffin says he’s so busy trying to convince everyone that he didn’t kill Kiki that he forgets she’s dead. Griffin hasn’t had a chance to mourn Kiki or to decide what her death means to him.

Griffin loved Kiki but hadn’t told her so. Griffin can only see that Kiki was alone in her final moments and scared. Sonny tells Griffin Kiki probably put up a hell of a fight. Griffin says Kiki was tough, but the violence won out. Griffin says he has to trust her to God and he doesn’t want to do that. Sonny offers to pay for Alexis for Griffin if he needs him to since he’s out of work. Griffin asks Sonny to go light a candle for Kiki. Chase arrives back at the PCPD with Kiki’s wallet; only her license is missing. Jordan and Chase feel Mary Pat (ex-Patricia Bethune) and Kiki’s killers are the same.

Bold and the Beautiful Spoilers & Recap Tuesday, December 4: Taylor Begs Brooke Not To Turn Her In