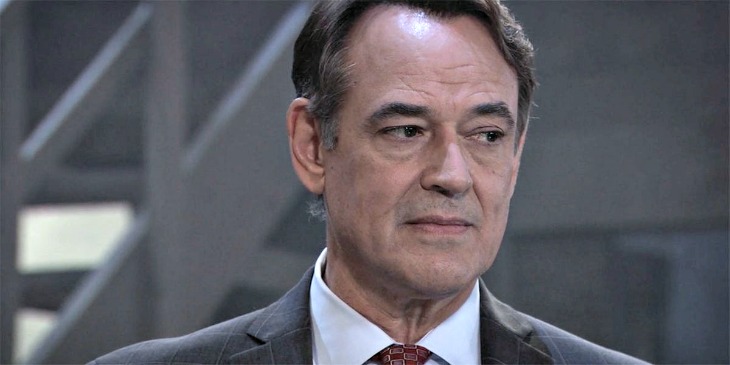 General Hospital spoilers tease that the confession Ryan Chamberlain (Jon Lindstrom) made to Ava Jerome (Maura West) in December 3rd’s episode may just backfire on him badly if he really meant it! He came right out and told Ava that HE killed her daughter Kiki Jerome (Hayley Erin)! General Hospital viewers have to be asking themselves, why would Ryan confess? Will he also admit he’s not Kevin?

GH Spoilers – A GH Ploy To Get Us Interested?

Of course, this could be a ploy on the part of General Hospital writers to merely get the viewer’s attention with a red herring, like they did when a scene of Elizabeth Webber (Rebecca Herbst) ran screaming from seeing “Kevin” stab his then-wife Laura Collins (Genie Francis) a couple of months ago.

But what if it’s not? If Ryan thinks Ava would be pleased with his “gift” of taking care of the Kiki and Griffin Munro (Matt Cohen) problem in the way he did, he doesn’t know Ava at all! She would turn her wrath and rage on Ryan and kill him instead of Griffin like she was threatening to do in the police interrogation room!

He could also be telling her he killed Kiki as a psychological trick to help her realize how useless it is for her to blame herself; if she thinks he sounds stupid taking the blame on himself, then maybe she will realize how she sounds and stops blaming herself. This seems to make the most sense, considering Ryan is impersonating his brother Kevin – a psychiatrist – and does seem sincere in his care for Ava.

GH Spoilers – Is Ryan Truly In Love With Ava?

Long-time General Hospital viewers may have a hard time believing that Ryan Chamberlain could be sincere about anything, let alone be truly in love with a woman! His past romantic MO has been all about power and control! Whether Ryan truly is in love with Ava and it’s clouding his judgment, or whether he has an endgame for her that’s not loving at all remains to be seen – as does his reason for “confessing” Kiki’s murder! Stay tuned to GH and keep checking General Hospital spoilers frequently to see what happens!