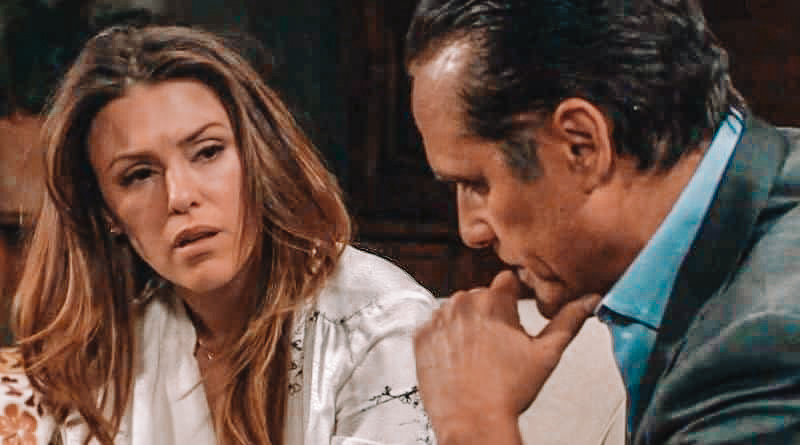 General Hospital (GH) spoilers reveal things with DA Margaux Dawson (Elizabeth Hendrickson) are rapidly changing and several people in Port Charles are noticing, and not in a good way! Could Margaux’s reality check from Sonny Corinthos (Maurice Benard) save him from prison but cost him a whole lot more?

GH sources indicate that Carly Corinthos (Laura Wright) has noticed that her husband, Sonny has softened his views when it comes to the new DA of Port Charles; initially reveling in the fact that they had the goods on her when they learned it was her own mother that ordered the hit on Vincent Marino after having an affair with Joe Scully, but something’s changed. Sonny’s compassion towards her situation has softened her views on the mobster and forcing her to question everything she has done and believed in.

Should Carly be worried about Sonny and Margaux developing feelings for each other; after all, we know there is no longer a chance in hell that Drew Cain (Billy Miller) will give her the time of day after she tried to blackmail him with his memories?

#gh Drew’s Next Love Interest Looms – Does He Belong with Kim, Margaux, Sam or Someone New? https://t.co/7MfDgMxFTi

General Hospital spoilers reveal Margaux will be busy these coming weeks, helping PCPD Police Commissioner Jordan Ashford (Briana Nicole Henry) work on the murder case of Kiki Jerome (Hayley Erin); something that will strike awfully close to home for the Corinthos family, not only because of their own tragic loss when Morgan Corinthos (Bryan Craig) died, but also how much they considered Kiki part of their family. Obviously, Kiki’s death is going to dredge up old feelings and will either bring Carly and Sonny closer together, or they can be explosive as they often are.

GH sources tease that CarSon may feel like they are secure, but they are treading on thin ice; both making irrational decisions in the heat of the moment; which has always been what destroys them. Could Margaux be the one that divides this solid home?

Be sure to tune into ABC’s General Hospital (GH) to catch up on everything happening in Port Charles right now. Check Soap Opera Spy often for updates, news, rumors, and spoilers!