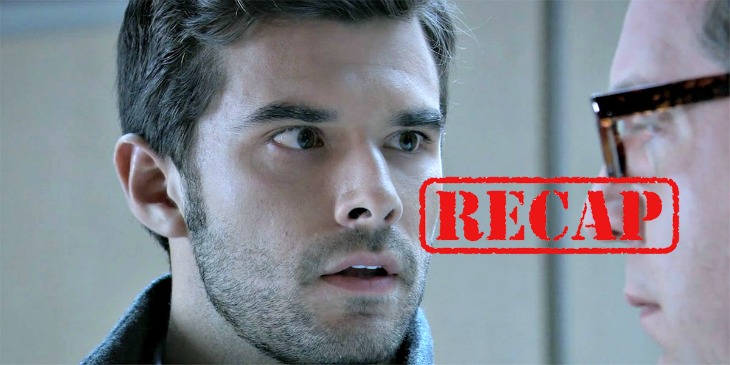 Laura asks Liz (Rebecca Herbst) if it is ok to try and get Aiden to open up to her. Liz tells Laura it is fine. Laura asks about Franco (Roger Howarth), Liz says he’s handling this the best he can. Laura is talking to Aiden about school and asks if he still plays with Bianca (Unknown actor). Aiden tells Laura that boys don’t play girls games. Laura asks if the teacher tells him that, Aiden tells Laura the teacher doesn’t make the rules in their class. Aiden isn’t allowed to talk about who makes the rules.

Laura tries to get Aiden to talk to her but he won’t. Cameron (William Lipton) talks to Aiden and questions his picture he has just drawn. Cameron tells Aiden he should draw himself as a giant bug. Lulu (Emme Rylan) comes to Kelly’s and talks to Laura about Charlotte’s (Scarlette Fernandez) behavior. Laura figures out Charlotte is bullying Aiden.

General Hospital’s Franco is in the air therapy room working out his frustrations. Liz goes to check on Franco and tells him Cameron wants to see him. Liz has told Cameron she isn’t sure this is the best time to speak to Franco. Cameron apologizes to Franco. Franco tells Cameron he thought he was Kiki (ex-Hayley Erin) father until she was 21 and then found out he wasn’t.

Kiki's death is hitting Franco hard. Is there anything anyone can do to lift his spirits? #GH is brand-new and STARTS NOW on ABC! #RogerHowarth #GH55 pic.twitter.com/2jme2tDWxU

Cameron tells Franco he has Him, Aiden, and Jake (Hudson West) as well as their mother, he still has a family with them. Franco doesn’t think Cameron likes him, Cameron tells him he is ok and hugs him. Drew (Billy Miller) goes to visit Franco. Drew wishes he could offer words of wisdom, but he is fresh out. Franco tells Drew that he wants to find the bastard that killed Kiki and murder him. Drew wants to put a face on the tumor that is killing Oscar (Garren Stitt) and kill it as well. Franco wants to postpone the wedding because of Kiki’s death.

General Hospital’s Willow (Katelyn MacMullen) asks Lulu if she has talked to Charlotte yet she says no. Lulu had hoped things were better at school by now. Willow wonders if this is the right school for Charlotte. Lulu can’t believe they want Charlotte moved to another school. Willow says Charlotte needs a school with more traditional punishment. Michael (Chad Duell) and Willow show up for the bereavement meeting.

The news of Kiki's murder has Nina concerned for Sasha. How far is she willing to go for her daughter? #GH is brand-new and STARTS NOW on ABC! #GH55 pic.twitter.com/z1PusmYzHD

General Hospital’s Nina (Michelle Stafford) arrives on Spoon Island; Charlotte welcomes her home. Charlotte wants to put Nina’s bags in Valentin’s (James Patrick Stuart) room, Nina corrects her. Lulu calls Valentin and wants to meet. Lulu tells Valentin she talked to Willow and they need to deal with Charlotte before she gets kicked out of school. Lulu and Valentin want to talk to Charlotte, Nina offers her cookies and won’t let them try to ask questions.

Charlotte leaves the room, Nina says nothing is wrong with their little girl, Lulu asks if she’s kidding. Lulu tells Nina she is just reinforcing Charlotte’s bad behavior by cutting her off every time she tries to correct Charlotte’s behavior. Nina mentions Valentin being quiet while Lulu yelled at her. Valentin blames himself for Charlotte’s behavior. Valentin says Charlotte saw him trying to win Nina back even though she wanted him to stop. Nina tells Valentin he is an amazing father and she loves him in spite of herself.

General Hospital Spoilers Alexis Is There For Julian

General Hospital’s Alexis (Nancy Lee Grahn) arrives at Charlie’s while Julian is having a drink. Julian yells that they aren’t open, then stares at Alexis. Alexis tells Julian she doesn’t believe that Griffin (Matt Cohen) killed Kiki and she doesn’t believe he does either. Julian wants Griffin to suffer for causing the estrangement between Ava (Maura West) and Kiki. Alexis asks Julian if he thinks Kiki would want Griffin to suffer. Julian says no, he thought they would have more time to get to know each other, he wasn’t close to Kiki.

General Hospital’s Oscar wakes up from his first treatment, Kim (Tamara Braun) tells him the treatment went well. Oscar doesn’t feel very good after his procedure. Kim tells Oscar that is normal. Liz comes to check on Oscar; he feels tired and achy like he has the flu. Jocelyn comes in, Drew tells him he thinks he is about to feel better. Jocelyn (Eden McCoy) brings homework and talks to Oscar about catching with this school work. Jocelyn tells Oscar he is in bed anyway he might as well make the best of it.

Cameron stops by to visit Oscar. Oscar tells Cameron he is a good friend. Oscar tells Cameron he is a good guy and he’s glad Jocelyn has him as a friend. Jocelyn and Cameron run into each other in the hallway, and she apologizes to him. Jocelyn wants Cameron to stay friends with Oscar; he needs support right now. Cameron gets in the elevator and leaves. Oscar sends Jocelyn for snacks, but none are what he wants. Oscar sends Jocelyn out for something else and then calls someone to the hospital. Jocelyn runs into Michael on the way out and hugs him, she doesn’t have time to mourn Kiki, but every time she leaves Oscar’s room her heart breaks all over again. Oscar calls Alexis to make out his will.

General Hospital’s Drew and Kim are in the hallway, Kim thinks they shouldn’t have left Oscar with Jocelyn. Drew tells her nothing is going on that Terri (Cassandra James) didn’t warn them about going into this. Oscar is running a fever, that is supposed to mean the treatment is working, Kim says unless it’s something else wrong. Drew knows it is hard to see Oscar sick, but they aren’t the cause. Kim said Oscar could have skipped the trial or it could be worse. Drew isn’t going to question things.

Liz tells Kim and Drew that Oscar’s symptoms are normal. Drew thanks Liz for comforting Oscar, she says after what happened to Kiki it’s nice to be able to do something. Kim and Drew ask what happened to Kiki, Liz assumed Julian had told Kim about Kiki’s murder. Kim rushes to Charlie’s to check on Julian and asks what he needs. Julian wants his niece back. Kim tells Julian she can be there for Oscar and give him love and support as well.

General Hospital’s Michael goes to see Chase (Josh Swickard) and questions where he is on finding Kiki’s killer. Michael tells Chase that Kiki was family. He and Kiki share a sister; she was in love with Morgan (ex-Bryan Craig), Michael’s brother. Michael said he had just talked to Kiki and told her how proud Morgan would be of her. Chase tells Michael he didn’t realize that Michael and Kiki were so close. 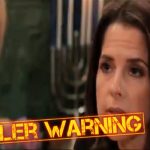 Michael sees Mary Pat (ex-Patricia Bethune), and Kiki’s files are together and ask Chase if he thinks they are connected. Chase and Willow bump into each other at the hospital; he asks her to dinner tomorrow night. Chase talks to what appears to be a medical examiner who tells him the precision of the stab wound explains her blood loss.

Young and the Restless Spoilers & Recap Thursday, December 6: Rey Has New Evidence In The JT Case