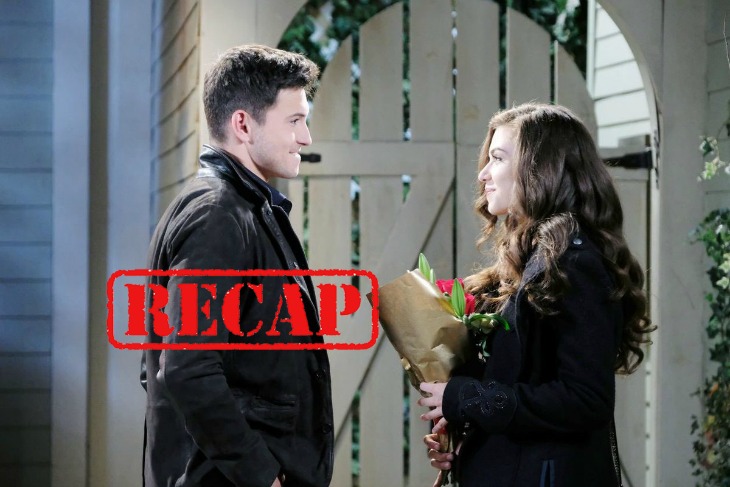 Days of Our Lives (DOOL) recap for Wednesday, December 5, 2018, reveals Ciara (Victoria Konefal) is getting ready for her date with Ben (Robert Scott Wilson) when Tripp (Lucas Adams) appears at her bedroom door.

Ciara asks what Tripp is doing there; he replies he lives there. Ciara says she thought he moved out, Tripp says he changed his mind. Ciara asks him why he says Claire (Olivia Rose Keagan) talked him out of it. Ciara tells Tripp he was pretty insistent on moving out the last time they talked. Tripp says she tried to talk him into staying as well. Ciara says them living together is not a good idea.

Tripp tells Ciara neither is breaking up with him for a serial killer but who’s keeping score. Ciara tells Tripp she broke up with him because he set Ben up and she couldn’t trust him anymore. Tripp asks what happened since the last time they talked. Ciara tells Tripp she had time to think things over and she got a job at the pub so she will have more than enough to cover his share of the rent.

Tripp starts sneezing; she forgot he was allergic to her perfume. Tripp asks if Ciara is going anywhere special tonight. Tripp tells her she has a date with Ben tonight, that is what has changed. Ciara doesn’t want to talk about that with Tripp; he tells her to have fun and not to let Ben set her on fire or strangle her with a necktie. Ciara shakes her head and walks out.

Today on @nbcdays, who's up for a little love in the afternoon? #days #cin pic.twitter.com/jpfKBZdrz4

Claire arrives home, Tripp has broken Ciara’s perfume bottle. Claire tells Tripp that Ben and Ciara were all over each other. Claire wants to join forces with Tripp to make Ciara move out. Tripp wouldn’t kick Ciara out because he’s jealous. Claire suggests they pack up Ciara’s stuff for her. Claire asks Tripp to promise to stay there.

John And Marlena Have Their Wedding Reception

Days of Our Lives’ Brady (Eric Martsolf) and Claire are having dinner with John (Drake Hogestyn) and Marlena (Deidre Hall). Claire talks about how nice it is that Sami (Alison Sweeney) has reunited with the love of her life. Brady says it’s amazing that anyone got out of that building. John knows Brady wishes Nicole had survived as well. Brady says it’s too bad Eric (Greg Vaughan) couldn’t join them, but he doesn’t want to be in the same room with him.

Marlena tells Brady to give Eric some time; he’s hurting right now. Marlena says Eric is trying to take care of Holly (Harlow and Scarlett Mallory). John asked if Eric has told Holly about Nicole yet, Marlena says she is meeting with him tomorrow to talk him through it. Marlena says it will be hard on Holly, but it is the first step toward healing and the first step toward them becoming a family again. Marlena laughs and tells John they have closed the place. John planned this so he could be alone with her.

John tells Marlena this isn’t the honeymoon he had planned for her. Marlena says their wedding wasn’t the one they had planned either but its just a typical year in Salem. John says he almost lost her. Marlena says they are together and married again. John goes to play a song to dance to but needs Marlena’s help. John has a cake, and they cut it and feed each other. Marlena suggests they go home.

Rafe Is Determined To Find Answers

Days of Our Lives’ Rafe (Galen Gering) is at the Horton cabin and finds the wine glass with Hope’s (Kristian Alfonso) lipstick on it. Rafe tries to call Hope but doesn’t have service. Rafe goes to Doug’s place and orders a drink; he asks Julie if she has seen Hope tonight. Rafe thought Hope and Jennifer (Melissa Reeves) might be there for dinner. Julie asks what happened this quickly; he says Hope is keeping secrets this time.

Julie tries to tell Rafe it has to be a misunderstanding; she can’t help him if he doesn’t tell her what is going on with them. Rafe tells Julie about Hope lying about taking a locket to Jennifer. Julie tells Rafe if Hope is cheating there has to be a reason for it. Rafe goes back to the cabin looking for Hope and waits for Hope to return.

Hope Orders Ted To Get That Confession

Days of Our Lives’ Ted (Gilles Marini) tells Hope that Ben has agreed to meet him tonight at ten. Hope asks why Ben wants to meet so late. Ted tells Hope that Ben has plans and she asks him to move the meeting up. Ted tells Hope he wants this over with as much as she does. Ted felt more comfortable at the cabin. Hope tells Ted she won’t let Stefan (Tyler Christopher) get to him, but if he doesn’t get the confession out of Ben, their deal is off. Hope tells Ted she needs to call Rafe, Ted begs her not to say anything.

Hope leaves Rafe a message saying she is having dinner with Jennifer tonight and may spend the night with her. Hope wishes she had never agreed to work with Ted. Hope trusts Rafe to keep her secret; Ted doesn’t. Hope tells Ted she lost a child once and told him about Zack (formerly Garrett and Spencer Gray). Ted tells Hope that he lost a kid about five years ago. Ted tells Hope she’s not going to lose her daughter, she says she has come close.

Hope says Ciara seeks out unhealthy relationships because she’s had trauma in her life, Ted assures Hope it isn’t her fault. Hope says it is all her fault. Ben cancels the meeting Hope demands to know why Ted tells her he is on a date. Hope says yes with her daughter. Hope is cursing Ben for being with Ciara. Hope doesn’t care what she has to do; she demands Ted get that confession out of Ben.

Days of Our Lives’ Ben is on the phone with Stefan and confirms his meeting with Ted for tonight at ten. Ben tells Stefan he will know that location soon. Ben says sometimes things work out; his first assignment is to bring him Ted’s head on a silver platter and Ted contacts him about unfinished business. Ben promises Stefan that he will have Ted by the end of tonight. Ben goes into Doug’s Place to book a table for two, Julie (Susan Seaforth Hayes) refuses to give him one. Julie refuses him service because she doesn’t like him. Ben just wanted to have a nice date and tells Julie Ciara is going out with him.

Julie says he will bring her to that restaurant over her dead body. Julie threatens to call the police to escort Ben out of the restaurant. Chloe (Nadia Bjorlin) comes in and asks if everything is ok, Ben tells her everything is fine. Ben tells Julie he knows she is Ciara’s grandmother and if worried about her but he won’t let her get hurt, he cares about her a lot. Ben tells Julie he took care of Ciara after her accident. Julie says Ben tried to kill her too; he says he didn’t start the fire. Ben tells Julie he is going to keep seeing Ciara. Julie threatens to terminate Ben herself. Brady stops by with a book for Parker. Chloe and Brady discuss Eric and Nicole. Brady has a plan to fix things with Eric.

Ben Shares News About His Job

Days of Our Lives Ben and Ciara meet outside the pub, she looks incredible. Ciara thanks Ben for picking her up there and he gives her flowers. Claire comes out and tells them to get a room. Ciara didn’t think Claire had a problem with Ben. Claire tells them to get a room just not at the loft. Ben brushes Claire off and tells Ciara to do that same. Ciara asks where they are eating. Ben couldn’t take her where he wanted to because they didn’t have a table. Ciara says they can eat at the pub; it’s her family business too.

Ciara suggests going in and cooking for themselves; Ben has another idea. Ben and Ciara get take out and have a picnic in the park. Ben tells Caira he has gotten his first assignment. Ben tells Ciara he is working for Stefan. Ciara is upset over Ben’s job and tells him Stefan is a monster; Ben tells her people say the same about him. Ben tells Ciara this was the only job he could get. Ciara asks if he has worked security before, Ben thinks Stefan wants someone who can intimidate people, and that is his skill set for better or worse. Ciara asks if Ben trusts Stefan, he says they get each other from one pariah to another.

Ben asks if this is a deal breaker with them. Ben promises to quit if Stefan asks him to do anything that crosses the line, she asks what line? Ben will never put their relationship in jeopardy, Ciara will always come first with him. Ciara doesn’t want to lose Ben. Ciara goes to pick up food while Ben makes a phone call. Ben calls Ted to reschedule their meeting. Ben and Ciara open fortune cookies. Ben’s cookie says “good things come to those who wait.” Ciara asks if she’s a good thing, he tells her she’s a great thing. Ciara’s says her date will end with a kiss; she says we already knew that and they kiss.