“General Hospital” spoilers for Wednesday, December 5, tease that Alexis (Nancy Lee Grahn) will come to Julian’s (William deVry) rescue. He’ll be battling some anger issues thanks to Kiki’s (Hayley Erin) demise and all the drama it’s led to for Ava (Maura West). Julian will hurl a liquor bottle to the floor as Alexis walks in Charlie’s Pub. She’ll sense that he needs to talk, so she’ll happily lend an ear.

Meanwhile, Valentin (James Patrick Stuart) will try to make more progress with Nina (Michelle Stafford). His plan to reunite with her seems to be paying off. Every interaction brings Nina and Valentin closer to together and Wednesday’s chat will be no exception. Valentin will assure Nina that Wyndemere will always her home and he’ll always be waiting to welcome her back.

As Nina wrestles with complicated love, Laura (Genie Francis) will ponder a mystery. She’ll sense that Aiden’s (Jason David) upset about something, so she’ll push the kid to share his struggles. Laura will promise that it’s OK for Aiden to open up. She’ll note that if someone’s bothering Aiden, it’s fine to tell her about it.

GH fans know Aiden’s been reluctant to divulge the bully’s name, but he could change his mind eventually. It looks like he’ll at least offer a clue in Wednesday’s episode. Since Charlotte (Scarlett Fernandez) is the one doing the bullying, that could make Laura and several other key characters part of this mess. 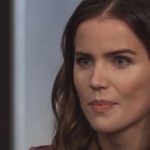 Other “General Hospital” spoilers say Franco (Roger Howarth) and Cameron (William Lipton) will have a heart-to-heart. They’ll try to work through any lingering problems, which is good since Franco’s in a dark place right now. He definitely needs the support of Liz (Rebecca Herbst) and her boys.

Michael (Chad Duell) apparently isn’t doing well either. He’ll show up at the PCPD raging about Kiki’s murder and demanding answers. Michael will corner Chase (Josh Swickard) and insist on finding out exactly where they’re at in the investigation.

Over with Willow (Katelyn MacMullen), she’ll bump into Lulu (Emme Rylan) and most likely cover a couple topics. Charlotte’s behavior should be part of the conversation, but Lulu may seek info on Willow’s love life, too. Chase is hoping to woo the sweet school teacher, so Lulu might ask how that’s going.

Other “General Hospital” spoilers say Oscar (Garren Stitt) will remain glum about his prognosis. It appears Josslyn (Eden McCoy) will try to focus on the future, but Oscar won’t be sure they have one. He’ll feel like Joss is jumping the gun when it comes to her grand plans.

Elsewhere, Kim (Tamara Braun) will keep Drew (Billy Miller) company and provide a source of strength. They’ll be there for each other as they face their son’s difficult crisis. This clinical trial has given them hope, there are no guarantees. Drew and Kim will just have to stay strong as they await news on Oscar’s condition.

It sounds like some gripping moments are ahead in Port Charles. We’ll give you updates as other details and rumors emerge. Stick with ABC’s GH and don’t forget to check Soap Opera Spy often for the latest “General Hospital” spoilers, rumors, updates and news.