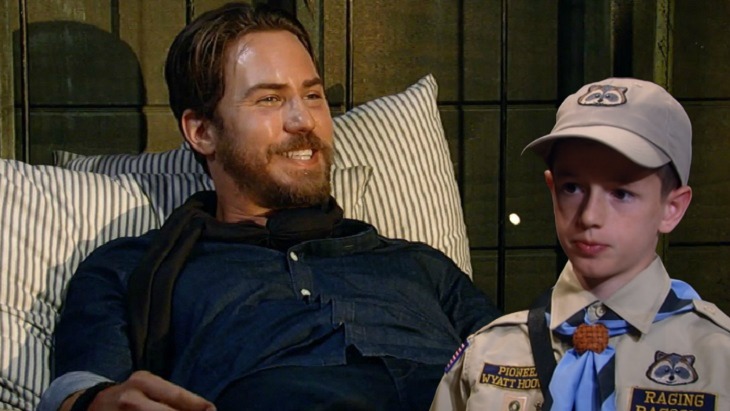 General Hospital spoilers indicate that Obrecht’s (Kathleen Gati) scheme with hiding Peter (Wes Ramsey) might soon come to and end. As a matter of fact, Wyatt’s (Patrick J. Gibbons) visiting Peter in the cabin might lead to some major trouble for Obrecht, which can only mean that Peter will finally get the help he needs, and that will be from a very unlikely source.

It won’t take very long for Wyatt to figure out that Obrecht is the person behind Peter’s captivity. He’ll take this information to Franco (Roger Howarth) and Finn (Michael Easton) and lead them to Peter all tied up in the cabin. At least, that’s what the plan is right now.

Obrecht though will overhear Wyatt tell Finn and Franco what is going on, with Franco asking her some questions. Eventually, both Finn and Franco will head over to the cabin, as Franco has a hunch that something must be going on.

Even though Obrecht is a clever woman, all of the stress of keeping Peter tied up will lead her to making some rash, or rather, bad decisions under some serious amount of stress. She ends up letting her guard down. Meanwhile, Wyatt figures that the key to solving what is going on might actually be in her shoes. While no one knows what is going to happen next, it’s safe to say that the wheels are definitely in motion.

Peter was hoping that someone like Maxie (Kirsten Storms) or even Nina (Michelle Stafford) will help set him free, but clearly that’s not the case. Will Obrecht manage to stop Finn and Franco from finding out who is inside the cabin? Of course, fans will just have to tune in to find out what will happen next!

General Hospital airs weekdays on the ABC network. Check your local listings for times. Let us know what you think in our comments section below. And as always, don’t forget to check back with Soap Opera Spy for all the latest news, updates and spoilers on General Hospital and all of your favorite daytime television shows right here!