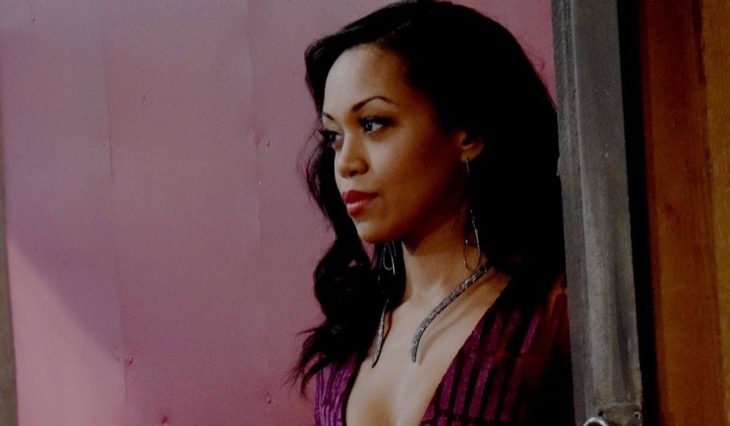 Hilary (Mishael Morgan) hasn’t forgotten that she’s pregnant with Devon’s (Bryton James) child on ‘The Young and the Restless’. She’s just allowed her focus to shift from that forthcoming boy’s, or girl’s father to Nate Hastings (Brooks Darnell).

It will be interesting to see how July flows into August this particular summer on Y&R. Morgan recently announced her departure from the cast, which is a major loss due to this actor’s consistently outstanding performances. The parting was amicable, but likely indicates that she won’t be returning to the soap anytime soon, if ever. The timing of her voluntary exit will directly impact the life of Hilary, Devon, and their child in ways that will soon be known.

Hilary is approximately less than halfway to her due date. That means Morgan’s final scenes were filmed before the baby would be born. And hopefully that happens, which could mean that another actor will be cast to fill this role.

It’s hard to know if decision-makers wrote the developing interplay between Nate and Hilary into the script before Morgan opted to depart. With whatever the case, tenured viewers surely feel that Nate’s arrival will play directly into ‘Hevon’s’ storyline while Morgan is still being seen.

Last week Neil (Kristoff St. John) sternly told Hilary, who had asked far too many personal questions after just meeting the man, that Nate had lost a loved one a year ago. That makes Darnell’s character very vulnerable and, as Y&R fans know, Hilary seems primed to offer consolation.

Devoted fans recall that Jordan (Darnell Kirkwood) caught Hilary’s eye during the period of time that ‘Hevon’ was off. Devon was pursuing Mariah (Camryn Grimes) at the time.

It was surely okay for both halves of ‘Hevon’ to be exploring romantic options after they’d divorced. But why is Hilary allowing herself to be drawn to Nate now?

Impulse control has long been one of Hilary’s self-acknowledged issues. So, ‘Hevon’ fans will be closely watching to see if Hilary crosses the line during the next handful of weeks. They, along with all soap fans will also continue to wish Morgan well as she pursues the next part of her professional career.

The Bold and the Beautiful Spoilers: Thorne And Katie Get Closer – New B&B Super Couple