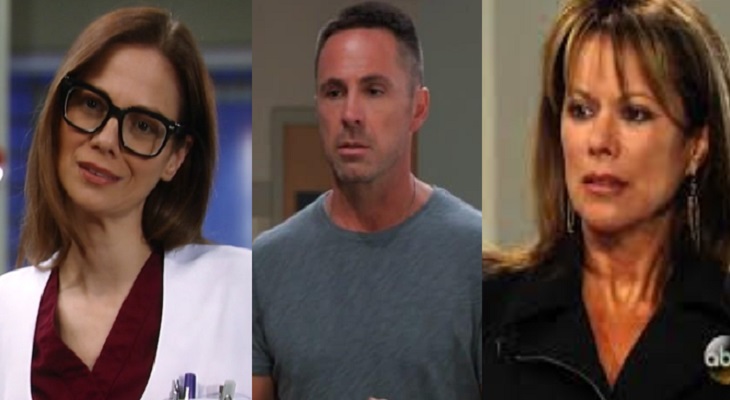 General Hospital spoilers tease that Julian Jerome (William DeVry) will celebrate a belated Christmas—but with who, his ex-wife Alexis Davis (Nancy Lee Grahn) or his friend with benefits, Dr. Kim Nero (Tamara Braun)? Kim has been getting increasingly close to Drew Cain, (Billy Miller) her great love of the past and father of her ailing son Oscar Nero (Garren Stitt).

However, when Kim and Julian first started their relationship on General Hospital, both admitted that they had emotional baggage for their exes; and Alexis has been getting closer to Julian again, although she still claims it’s just close friendship and nothing romantic for Julian anymore.

However, in the recent scene in Charlie’s Pub where she spots Kim and Julian embracing outside the window, that sure looked like the green-eyed monster of jealousy in Alexis’ eyes as far as many General Hospital fans were concerned!

Kim was no doubt overwhelmed with Oscar’s situation and Julian was no doubt comforting her. Of course, he just lost his niece Kiki Jerome (Hayley Erin) to murder on General Hospital, so that comforting may have been going both ways!

Other General Hospital spoilers tease that Kim and Drew will reconcile romantically when Drew’s memories return, thanks to the flash drive with his memories that he begrudgingly accepted from DA Margaux Dawson (Elizabeth Hendrickson), who seems to be on a mission of restitution to those she’s wronged after letting go of her vendetta about her father.

Just as many spoilers have teased that he and Margaux would get together, although it seems like that ship has sailed and sunk! But if Kim and Drew do ultimately get back together romantically, that will leave room for a revival of “Julexis” which many GH fans are hoping for!

So will Julian’s belated Christmas celebration be with Kim, Alexis, or perhaps neither…maybe he will spend time with sister Ava Jerome (Maura West) and niece Avery (Ava and Grace Scarola) or maybe his son with Olivia Falconeri (Lisa LoCicero), Leo (Aaron Bradshaw)?