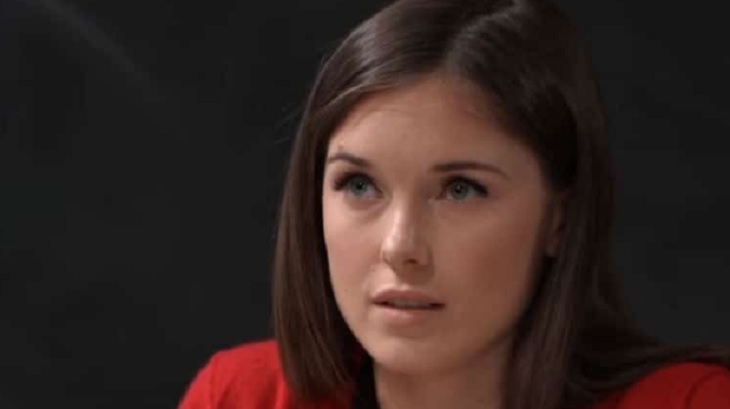 General Hospital spoilers tease that Willow Tait, (Katelyn MacMullen) who in recent scenes with Jullian Jerome (William DeVry) gave telling looks that she is the original Wiley Cooper-Jones’ (unknown twins) birth mother, also knows that the baby given to Lucas Jones (Ryan Carnes) and Brad Cooper (Parry Shen) for adoption, is not her baby!

Not only did Julian and Willow give each other very telling looks in December 20th’s General Hospital episode, when Julian received a text on his cell phone with a picture of Lucas holding “Wiley”, Willow saw it! More than likely, after giving birth, she did at least meet her infant son and say goodbye, so she can tell that could not be her baby!

The fact that she is in a bereavement class for parents who have lost children along with “Wiley’s” birth father Michael Corinthos (Chad Duell) seems to indicate she knows her baby died, but the problem with that supposition is that Julian convinced her to go through with the adoption before the original Wiley, who died, was given to Lucas and Brad.

But then she may be going to the class because she is grieving having given her baby up for adoption, since there doesn’t seem to be a similar class for parents regretting they gave their babies away—and this is the next best thing. After all, grief is grief, and loss is loss; no matter if the child actually died or only the chance at a relationship with them; at least until the child is legal age!

Either way, when Willow spotted that picture on Julian’s phone, she knew something was wrong; very, very wrong! Many General Hospital viewers have noticed the vast difference between how the original Wiley looked and how the “replacement Wiley” – aka Jonah Corinthos (Eric and Theodore, no last name published) looked.

Jonah was much bigger and had a much lighter complexion than original Wiley, who was small and also had some dark hair on his head, whereas Jonah was mostly bald or maybe some light peach fuzz on his head. Julian noticed that too and he had discussions with Brad about it!

It will not be surprising if Willow gets together with Julian and asks some very pointed questions, such as why Lucas and Brad have a different baby, and what happened to hers! If looks could kill, she obviously was very tempted to kill Julian! This will put Julian in a huge dilemma; he already is keeping the baby swap secret for Brad, and now Willow knows that her baby is not with the adoptive parents!

Many babies do look alike, but not in every single detail, and it’s surprising that no one else who saw the original Wiley has realized that the replacement Wiley looks nothing like him! Willow may even press Julian about getting her baby back, and then Julian will have the heartbreaking task of telling her he really did die! Stay tuned to GH and check General Hospital spoilers frequently to see how Julian gets out of this heartbreaking conundrum!

Young And The Restless News: Writer Change Brings Michael Muhney’s Fans Out To Call For His Rehire: ‘Bring Adam Newman Back’