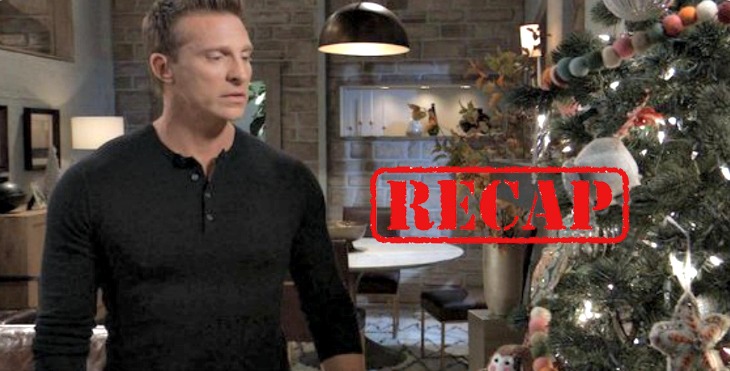 General Hospital (GH) spoilers and recap for Monday, December 17 reveals Sam (Kelly Monaco), Danny (T.K. Weaver) and Jason (Steve Burton) are at the hospital dropping off for “Toys For Tots.” Jason says now some other kids can have a gift for Christmas.

Danny asks what about Santa Claus, Jason and Sam look at each other. Jason tells Danny that Sam can explain this better. Sam tells Danny that Santa needs help sometimes and he is like an elf. Danny wants to see Santa; Sam tells him it is too late. Danny wants Jason to go with him when they do, Jason agrees. Sam tells Danny they will pick a date when they get home, he asks if Jason is going with them. Jason and Sam say yes, and the three leave together. Sam keeps looking at her phone, Jason questions what is going on with her. Sam wasn’t sure if she should say anything but someone knows about the con she used to run marrying men and they have tracked her down.

Sam shows Jason the obituary and tells him what has been going on with the newspaper. Sam is ashamed of that part of her life, Jason tells her she has moved on and isn’t that person anymore. Jason says they will deal with whoever is harassing her. Jason says if someone is trying to shake her down they will take care of them. Jason asks when the last time Sam reached out to them was, she said yesterday. Sam says she will not let someone control her when she has more important business to conduct.

WATCH: It's been a long time since these two have been able to spend (an uneventful) Christmas together. @1SteveBurton @kellymonaco1 #GH55 pic.twitter.com/yVg6dB7oUs

Jason asks what that business is. Sam starts to kiss Jason but has to go to the kitchen to check on sometime she asked Danny to do. Jason reminisces about Christmas’ past. Sam being Jason his stocking Danny made for him. Sam won’t let Jason thank Danny for the stocking because he’s not supposed to know where it came from, it’s a part of giving. Sam loves seeing Jason happy. Sam wonders if Jason can spend part of Christmas with him. Jason tells Sam, of course, he can.

Sam asks Jason what he wants Santa to put in his stocking. Sam tells Jason he never tells her what he wants for Christmas. Jason can prove it’s not impossible to get an answer from him, what he wants to Christmas is to spend the day with her. Sam doesn’t know how she’s supposed to fit that in a stocking. Jason says they don’t have to do anything special. Jason tells Sam they can do everything with the kids, he doesn’t need anything else. Sam tells Jason she thinks that can be arranged and they start to kiss.

General Hospital’s Lulu (Emme Rylan) and Charlotte (Scarlett Fernandez) show up at Liz’s (Rebecca Herbst). Liz questions why they are there, Lulu says Charlotte needs to apologize to Aiden (Jason David) for bullying him. Laura (Genie Frances) tells Charlotte to check out the Christmas tree while the adults talk. Liz questions this and Laura, and Lulu explains how they figured this out. Liz is having a hard time processing this; Lulu isn’t sure why Charlotte is acting this way.

Aiden comes face-to-face with his bully today, West Coast. But will their apology be enough to fix the damage?
An emotional, new #GH starts RIGHT NOW on ABC! #GH55 pic.twitter.com/AjpswRFs4J

Lulu tells Liz that Charlotte says Aiden is different and doesn’t fit in with the other kids. Laura hopes that Aiden will open up now. Charlotte apologizes to Aiden and gets upset when he doesn’t accept. Liz talks to Aiden, and he finally accepts her apology. Charlotte says she is glad she could make Aiden feel better and asks Lulu if she and Papa will be proud of her now. Aiden comes downstairs and asks if Charlotte is gone. Liz tells him yes and asks if he wants to talk about anything. Aiden doesn’t want to talk but will listen to her. Liz tells Aiden how much everyone loves him and that he can come to her, Franco and his brothers if he needs to talk. Lulu and Laura take Charlotte out for ice cream. Lulu says she bets Aiden is happy he won’t be bullied anymore. Charlotte tells Lulu and Laura that others bully Aiden too.

General Hospital’s Oscar (Garren Stitt) wakes up and talks to Cameron (William Lipton) for a few minutes. Cameron gets a text about the drugs; Oscar asks who is messaging. Jocelyn (Eden McCoy) comes in and tells Cameron about the conversation with Franco. Jocelyn has brought Oscar one of the brownies, and he takes a few bites. Cameron leaves to find Franco. Jocelyn tells Oscar it is ok to tell her and his parents if they are annoying him. Jocelyn tells Oscar that she understands. Oscar can’t believe that Cameron baked brownies for anyone.

General Hospital’s Jocelyn rides in the elevator with Franco to Oscar’s floor. Franco offers her a brownie; she turns him down. Franco tells Jocelyn that Cameron made them for a bake sale at school, she asks what bake sale. Jocelyn knows nothing about a bake sale, maybe Cameron is nice. Franco says no one at the school knew anything about it either. Franco calls the school and asks about the drama club.

Cameron tells Franco he told Laura they were for the drama club, but Oscar ate part of one. The drug dealer keeps texting Cameron demanding money. Cameron says they were talking about the bake sale, but Franco doesn’t buy Cameron’s story. Cameron rushes off and forgets his phone. Franco looks at Cameron’s messages and sees the drug deal texts. Franco goes home and tells Liz he needs to tell her something just as Cameron realizes he left his phone.

This isn't going to end well… Mike and Yvonne's hug turned into a kiss, right in front of Marcus. An all-new #GH starts RIGHT NOW on ABC! @MaxGail #GH55 pic.twitter.com/DX5ZB0JLg3

General Hospital’s Sonny (Maurice Benard) wants to take Mike (Max Gail) home, Carly (Laura Wright) asks him to wait for a minute, he’s busy. Marcus (Nigel Gibbs) walks in as Mike kisses Yvonne (Janet Hubert). Marcus grabs Sonny and pulls him away from Yvonne. Yvonne tells Marcus that Mike is her boyfriend. Marcus tries to explain to Yvonne that he is her husband. Marcus says Mike is manipulating Yvonne; Sonny tries to explain that Mike doesn’t know what is going on either.

Carly tells Marcus they need to have compassion, neither of them remembers. Marcus shows Yvonne wedding pictures while Sonny tries to talk to Mike. Yvonne calls Marcus her big brother and says tell mom not to hold dinner. Sonny tells Mike he is just making sure because Mike has pretended to forget before. Carly tells Mike that maybe he can remind Yvonne she’s married when she forgets. Mike tells Carly that trying to hold onto these facts is like trying to hold onto snowflakes. Sonny and Carly want to involve Stella in this thing with Mike and Yvonne. Mike and Yvonne have disappeared.