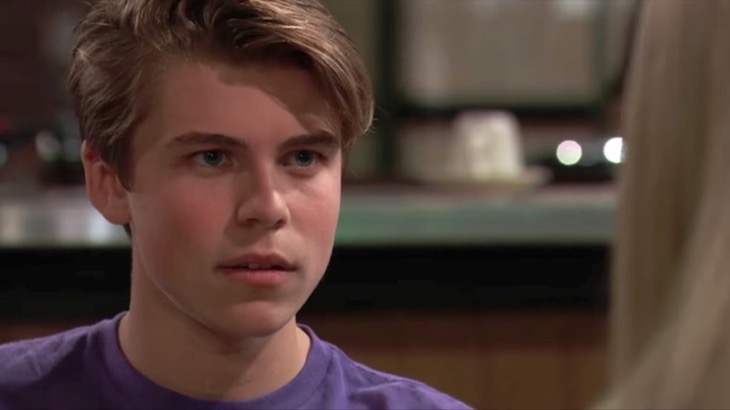 General Hospital spoilers tease that Cameron Webber (William Lipton) really does have a tender heart underneath his tough and sometimes snotty bravado. He will feel so sorry for his lifetime friend Josslyn Jacks (Eden McCoy) he’ll decide it’s just not worth her heart breaking over Oscar Nero (Garren Stitt) dumping her and decide to tell her about Oscar’s potentially fatal brain tumor.

Cam likely feels guilty over conspiring with Oscar to deceive Joss about the real reason Oscar is distancing himself and his part in it, so he will probably admit the photo of Oscar with another girl is a fake too. After all, he already admitted it was he, not Oscar, that texted Joss those riddles a while back!

Josslyn may be even more upset when she finds out about Oscar’s grim diagnosis, but at least she will understand and appreciate the truth. She will know that Oscar is trying to spare her from witnessing his likely decline and death, and wants himself out of her system long before that happens. She may be a little upset with Cam for not telling her before now, but she’ll probably accept his apologies.

Joss: What ever Oscar is going through I’m going to be by his side, #GH pic.twitter.com/F71qbdBf2v

Other General Hospital spoilers have hinted that Oscar may try to get Cameron and Josslyn together before his death as a plan for Josslyn to be taken care of and looked out for. Viewers have to wonder if Oscar has forgotten all about Mama Bear Carly Corinthos (Laura Wright)! But, Oscar is thinking about Joss’s emotional and romantic needs, not her physical needs!

General Hospital spoilers also tease that Oscar will confront Cameron about something, and it’s probably that he broke his promise to Oscar about his secret (which Cam had warned him about) and knows that he’s been busted to Joss. In response, she will likely reach out to Oscar in some way to let him know that she knows and that she still loves him and is there for him.

She may go to his mom Dr. Kim Nero (Tamara Braun) or possibly his dad Drew Cain (Billy Miller) if Oscar has blocked her on his phone with the news that she knows. Even if she doesn’t bust Cameron as the source of her knowledge, Oscar will figure it out! Stay tuned to GH and keep checking General Hospital spoilers to see all the drama between Cam, Oscar, and Joss!