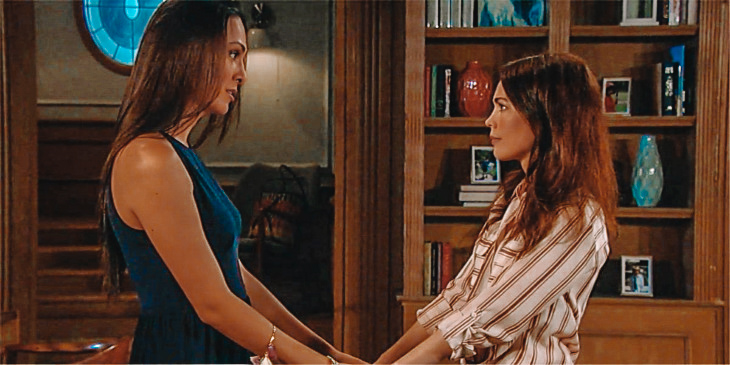 General Hospital spoilers tease that little Aiden Spencer’s (Jason David) problems at school and nervous stomach come from being bullied. Several weeks ago, big brother Cameron Webber (William Lipton) and future stepfather Franco Baldwin (Roger Howarth) got into a small argument over Franco being okay with Aiden wanting to take Princess Kalinda of Everwood pencils to school, which Cam warned Franco Aiden would be bullied over. So it’s likely that after Franco bought Aiden the pencils, that exact bullying scenario is what is happening to little Aiden.

Aiden is so afraid he even hid a letter from his teacher to his mother Liz Webber, (Rebecca Herbst) telling her he was afraid he would be in trouble with her! She encouraged Aiden to always give her any letters from teachers, and he wouldn’t be in trouble over it. It has yet to be revealed what the contents of the letter are, it may be that the teacher is concerned about problems at home, since it’s unlikely Aiden has confided any bullying problems to any authority figures at school. He’s just too afraid to tell anyone, so the bullying must be rather severe!

It is common for children, and adults for that matter, to enjoy hobbies and to do things outside normal gender stereotypes. For instance, many women enjoy building things and many little girls enjoy participating in activities formerly stereotyped as male only, such as fishing or playing football. Likewise, we see many male chefs and little boys who enjoy cooking or playing with dolls.

Welcome to PC, Terry and welcome to #GH @cassandrajames_ 💜💜 pic.twitter.com/ftkpN0XQHp

This has nothing to do with gender dysphoria, which is a feeling that one’s emotions and self-image inwardly doesn’t match with their body and what they are biologically. However, some children who are raised by parents who stereotype activities and likes and dislikes as male and female, may bully a little girl and call her a tomboy, or bully a little boy and call him a sissy, or worse!

Dr. Terry Randolph (Cassandra James) who was a best friend of Liz’s in school took a much different path as an adult to deal with her own problems, but that doesn’t mean she doesn’t understand what it’s like to be bullied as a child over stereotypes. She may be an ideal person who can truly relate to Aiden’s problems with being bullied over liking things stereotypically female and be able to help and possibly suggest a plan of action to deal with the bullies.

She also would likely volunteer to help Liz with Aiden’s problems, having been her best friend when they were in school. Keep watching GH and checking General Hospital spoilers frequently to see if Dr. Terry intervenes, and how she helps Liz and Aiden with the problems at school.

Days of Our Lives Spoilers: Help on the Way for EJ Search – Vixen Crossed – Dire Consequences for One?