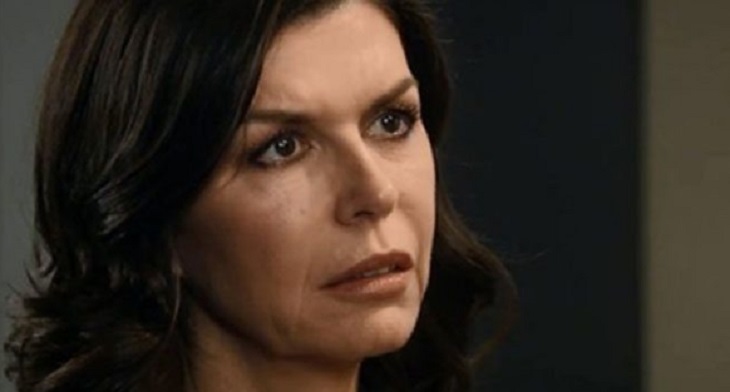 They more than likely did, since it’s obvious by Sasha Gilmore’s (Sofia Mattsson) striking family resemblance that she is a close family member, although not Nina’s daughter. And Anna has the family member she bears the most striking resemblance to staying in her own home, and that’s Britt Westbourne (Kelly Thibaud)!

Once Anna meets or sees Sasha up close, her spy skills will go into overdrive! She, like General Hospital viewers, will know that Sasha’s strong resemblance to Britt cannot be a mere coincidence! Most likely she will use her WSB expertise and sources to confirm the tests Valentin had done were not faked first; once she confirms the tests are legitimate and Sasha is a 99% DNA match to Nina, then she will likely proceed to bring in Britt’s DNA and pay the labs to test Sasha’s against Britt’s.

Other General Hospital spoilers tease that Britt may have given birth to a child as a teenager, perhaps as a very young teenager and either she gave her baby up or her mother Liesl Obrecht (Kathleen Gati) did.

This could explain Britt’s obvious love and attachment to children, and why giving “Baby Ben”, who was really Rocco Falconeri (O’Neill Monahan) to his real parents Dante (Dominic Zamprogna) and Lulu (Emme Rylan) was so hard on her.

The labs should still have Sasha’s DNA samples, and Britt’s will be easy. They already have her blood samples from the medical tests ordered by Dr. Hamilton Finn (Michael Easton) and can extract her DNA from those.

Nina will be devastated when she finds out the truth, but perhaps with Anna and the WSB involved, Anna will find the truth and the girl with the other half of the half heart necklace! Stay tuned to GH and keep checking General Hospital spoilers frequently to see what other truths come out!

General Hospital Spoilers and Promo: GH Is Back On Friday! Homecoming For The Teen…