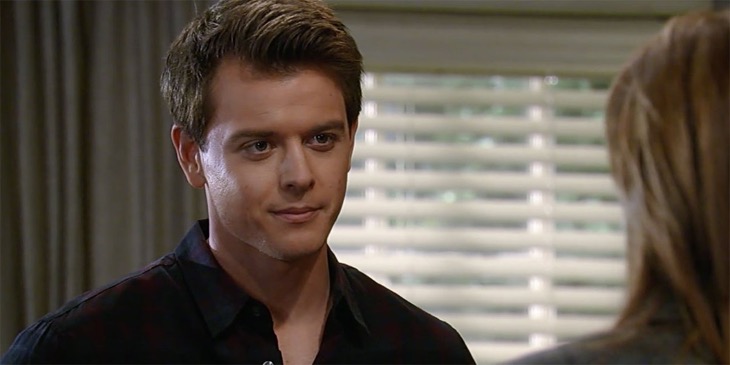 Nina Pays Someone To Lie About West Niles Virus

Nina tells Valentin that the environmental agency is checking out the island for West Niles virus. Someone shows up claiming to be from environmental protection and tells Valentin Spoon Island is under quarantine. Nina tells Valentin that he has to provide her with real ads now. Valentin tells Nina she doesn’t have him fooled with this, she rushed to find him and that can only mean one thing. Nina claims to have warned Valentin for Charlotte (Scarlett Fernandez) and out of human decency. Valentin is taking a room at the Metrocourt, they could be neighbors. Curtis (Donnell Turner) shows up to see Nina, he wants to know about Liesl.

What the sequel to the Severed Branch really needs is a new protagonist. Tune into an all-new #GH – STARTING NOW on ABC! #GH55 pic.twitter.com/PzAW24IFKJ

Liesl accuses Peter of having Stockholm Syndrome. Peter thinks the sequel should be about Liesl. Nina questions Curtis about Liesl being a person of interest. Curtis asks if Nina has noticed anything odd about Liesl. Nina tells Curtis that Liesl is a lunatic and tells him she must make a call. Peter wants to tell Liesl and Nathan’s story. Liesl tells Peter no one has considered that she has a story to tell. Liesl asks Peter where to begin, he starts her out with once upon a time. Liesl starts to talk about a little girl that no one understood.

General Hospital’s Sam (Kelly Monaco) and Curtis show Jordan the footage from the Metrocourt. Sam points out the shoes to Jordan. Jordan says they can’t make out Peter in the laundry cart or whose pushing it. Sam and Curtis eliminate Maxie (Kirsten Storms) and Nina and concentrate on Liesl. Sam and Curtis figure out that Nina may know something about Peter. Sam speaks to Valentin who tells her about the outbreak of West Niles. Curtis doesn’t think Nina kidnapped Peter. Sam asks Curtis about West Niles. Nina pays her actor friend but has him to leave the quarantine sign. Valentin makes an appointment with Finn.

WATCH: Mike helps Stella see her reluctance to give Curtis and Jordan her blessing from a fresh perspective. #GH55 pic.twitter.com/a27hto54eY

Mike Talks To Stella About Jordan And Curtis

General Hospital’s Stella (Vernee Watson) stops in to talk to Mike (Max Gail) and Sonny (Maurice Benard). Mike needs a tango partner, Stella says she’s available. Mike talks about Michael’s wedding. Mike and Sonny talk about His and Adella’s wedding. Mike asks Sonny why he is worried about the wedding. Stella tells Sonny and Mike that the pharmacy is working on the prescription now. Mike sends Sonny to get his medication, so he can talk to Stella.

Mike asks Stella why she doesn’t want to see two people in love and happy. Mike tells Stella that if two people are lucky enough to find love, they should take it and stopping that isn’t anyone’s Christian duty. Sonny comes back to pick up Mike, Stella has a change of heart and calls her friend back. Mike and Sonny leave the hospital to go to Michael’s (Chad Duell) wedding.

Nelle Eavesdrop On Michael And Alexis

General Hospital’s Alexis (Nancy Lee Grahn) shows up to see Michael, he wants her to draw up his will. Michael wants to get the will out of the way, the sooner the better. Michael tells Alexis that baby changes things, he wants to make sure the person he loves the most is taken care of upon his death. Alexis wants to know what the rush is,

Michael tells Alexis he wants to leave everything to his child. Nelle listens in on the conversation between Alexis and Michael. Alexis tells Michael she will have things ready tomorrow. Alexis leaves, and Nelle comes to find Michael. Nelle asks Michael if he loves her, he’s shocked that she isn’t getting ready for the wedding. Michael wants to know why Nelle is questioning him.

Michael tells Nelle he’s trapping her if anything because he’s the one who wanted the wedding today. Michael assures Nelle that they will be so happy with the baby after the wedding. Michael tells Nelle the guests will be arriving soon, and Nelle calls the lawyer back as soon as he leaves the room. Nelle asks the lawyer what happens if someone dies without a will. Nelle finds out that if someone dies intestate the spouse inherits everything, Michael listens in and is furious.

T.J. Agrees To Give Jordan Away

General Hospital’s Jordan (Vinessa Antoine) goes to the hospital looking for T.J. (Tequan Richmond) and asks Stella to help plan the wedding. Stella wants to know if it’s not a little early to start planning the wedding. Stella tells Jordan to not spoil it and have a long engagement. Stella agrees to supper one night and tells Jordan to give her love to T.J. Stella calls and asks someone to come and visit, Curtis would love to see her. T.J. wants to bail on lunch, Jordan wants to know if he will give her away at the wedding. T.J. tells Jordan that he told Stella Tommy would want Jordan and Curtis together.

Alexis Tell Michael About The Will

General Hospital’s Alexis runs into Sonny and they talk about Michael’s will. Alexis tells Sonny they will reexamine the will after the wedding when Michael has time to calm down and think a bit. Sonny is afraid it may be too late already.