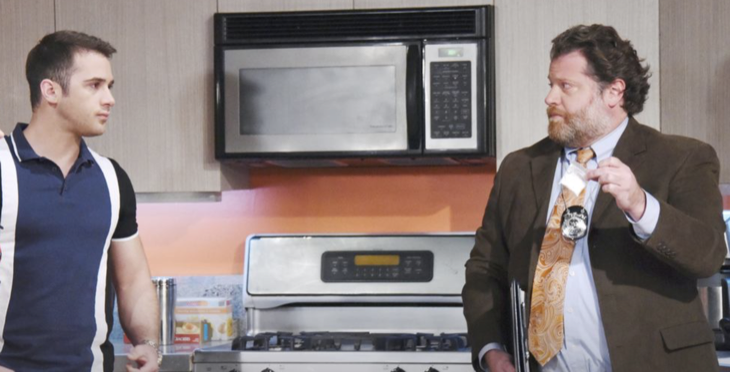 Days of Our Lives (DOOL) spoilers for Thursday, July 12th reveal, Eric (Greg Vaughan) is at the pub when Jennifer (Melissa Reeves) arrives with donuts. Jennifer tells Eric that the donuts are for J.J. (Casey Moss).

Eric Advises Jennifer To Let J.J. Live His Own Life.

Eric asks if she’s trying to keep an eye on J.J. so he doesn’t get too close to Theresa (Jen Lilley). Jennifer is afraid Theresa will bring out the worst in him. Jennifer doesn’t want J.J. to backslide because he’s vulnerable, Eric tells her Theresa has learned from her mistakes. Jennifer says thank god for Gabi saving J.J.

Eric tells Jennifer J.J. can handle this and he won’t fall into any traps. Eric thinks that battle with Brady could end very badly. Jennifer thanks Eric for always being there. Eric wants to know if that means Jennifer is hanging out with him. Jennifer begins to feed Eric a donut.

Days of Our Lives’ J.J. comes out and sees Theresa looking at a picture of her with Brady (Eric Martsolf) and Tate (Kyle and Colin Schroeder). Theresa tells J.J. that she can’t believe her parents can’t even come and see her. J.J. would rather be Theresa’s wingman, she deserves to hold on to her kid. Theresa says she has made a mess of everything and Brady might go to prison because of it. J.J. advises Theresa to listen to what Brady said earlier and put aside their differences.

Theresa wants to know when J.J. got so mature. Theresa thinks she partied is because she was never alone, that’s why she doesn’t want to share custody. Theresa is afraid to build a life without a partner, no one will believe she can be the mom Tate deserves. J.J. tells Theresa that he does. J.J. tells Theresa that she took on Kristen Dimera (Eileen Davidson) and Mateo (Andoni Gracia) for her son, Tate is a lucky kid to have her.

Theresa doesn’t want to make things worse for Tate, she needs to choose which to do, J.J. tells her he’s with her all the way. Child services show up to inspect J.J.’s apartment since Theresa lives there. The man from Child Services finds what looks like cocaine under the kitchen sink at J.J.s

Could anything have prepared Eve for the bomb Brady dropped? #DAYS pic.twitter.com/nGJSinQO9R

Days of Our Lives’ Eve (Kassie DiPaiva) is on the phone with Victor (John Aniston) and tells him the tape isn’t there. Eve tells Victor that Brady insists on protecting Nicole (Arianna Zucker). Eve says they need to move to plan B, Brady walks in and asks what Plan B is. Eve makes up a story about looking for the contracts from Stefan, Brady tells her to get another set.

Brady refuses to force Nicole to come back and face a murder charge. Brady thinks he might have gotten Theresa to drop the case. Theresa goes to see Brady and give him her answer. Brady tells Eve that he and Theresa talked, and he thinks it’s a good sign. Eve argues Brady that he would be a fool to trust Theresa. Brady tells Eve he has been the same way, he knows how Theresa feels. Theresa knocks on Brady’s door. Brady invites Theresa in and wants to know if she has considered his offer.

Theresa says she has been doing a lot of thinking, she wants to talk to Brady alone. Brady tells Theresa he just wants to do what is right for Tate, she says they shouldn’t have any trouble working this out. Brady tells Theresa if she looks into her heart she will see this is best for Tate. Theresa can’t understand how Brady is ok with hurting her. Theresa doesn’t believe that Brady doesn’t love her. Theresa needs Brady to look into his heart and see if she is still in there.

Brady tells Theresa he is with Eve and that isn’t going to change. Theresa says no matter how hard she fights she isn’t going to get what she wants. Theresa tells Brady she will agree to joint custody and have Ted call Justin to work it out. Eve calls Victor and tells him Theresa and Brady came to an agreement. Victor tells Eve it is too late to stop it now.

Does she have the best intentions? #DAYS pic.twitter.com/pPL8F0huxf

Gabi Has A Serious Problem

Days of Our Lives’ Abby (Marci Miller) is on the phone with Kayla (Mary Beth Evans), the test results should be back today. Gabi (Camille Banus) tell Kayla that she knows about the baby and the paternity question. Gabi tells Kayla she is there for herself. Gabi tells Kayla about the pain which she says they will check out. Kayla exams Gabi and they talk a little about prison.

Kayla wants to run some tests on Gabi, she agrees. Gabi calls Maggie (Suzanne Rogers) and tells her she will come to see Ari. Kayla comes in and tells Gabi she knows where the pain is from and it’s serious. Gabi may not be able to have kids because of an infection in her reproductive organs. Kayla says they would treat it aggressively, Gabi doesn’t know how to react. Kayla tries to calm Gabi down, she tells her it will be ok. Gabi blames Stefan (Tyler Christopher) and Abby for this infection. Gabi gets her hands-on Abby’s DNA results.

Days of Our Lives’ Chad (Billy Flynn) walks in and asks if Abby forgot to mention something to him. Abby thought Chad was at work and he shows her the article. Abby tells Chad that she called in a favor and pitched the idea to them. Chad asks Abby to stay away from Stefan. Chad and Abby talk about Leo’s disappearance and how it has helped the company.

Abby is happy for Chad and Sonny, they begin to kiss and fall back on the bed. Chad tells Abby he wants to have another baby. Abby says she has thought about it but wasn’t sure what Chad would think. Chad says that there is nothing he would rather do than have another baby with Abby. Chad thinks he is pressuring Abby so offers to table the baby discussion.