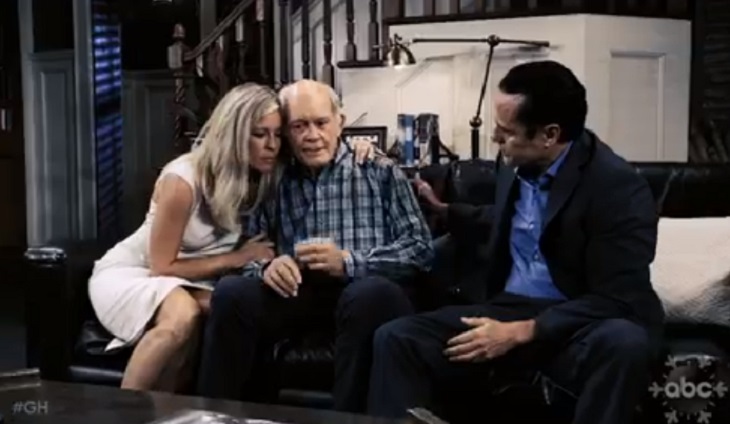 General Hospital spoilers indicate that Sonny Corinthos is growing increasingly worried about his father Mike and his declining health. As a matter of fact, the entire Corinthos family is worried about Mike’s future, as his Alzheimer’s disease seems to be getting worse by the day. Here’s what you need to know.

There’s a new General Hospital teaser trailer that shows a flashback of Griffin giving Mike and Sonny the devastating news of his diagnosis. Since then, things have deteriorated significantly.

Carly, who has always felt a strong connection to Mike, is trying to hold on to him while Sonny is praying on his knees. They don’t want to lose Mike but at the same time, they don’t know what’s in store for his future.

If that weren’t enough, Sonny also has to be on the lookout with Mike’s new love interest, Stella. Even though she is a smart, fierce and very compassionate person who knows how to work with Mike and his illness, she’s also a woman with a past. But how long their relationship will last is anyone’s guess at this point. For the Corinthos family, adapting to this new ‘normal’ has proven to be very difficult as no one knows what to expect.

So far General Hospital producers have not made any comments about Mike’s future or if this means there will be an unexpected twist to this storyline. In other words, anything can happen to Mike at any time. Of course, viewers will simply have to tune in to find out what will happen soon!

In the meantime, drop us a line with your thoughts in our comments section below. And as always, don’t forget to check back with Soap Opera Spy for all the latest news, updates and spoilers on General Hospital and all of your favorite daytime television shows right here!