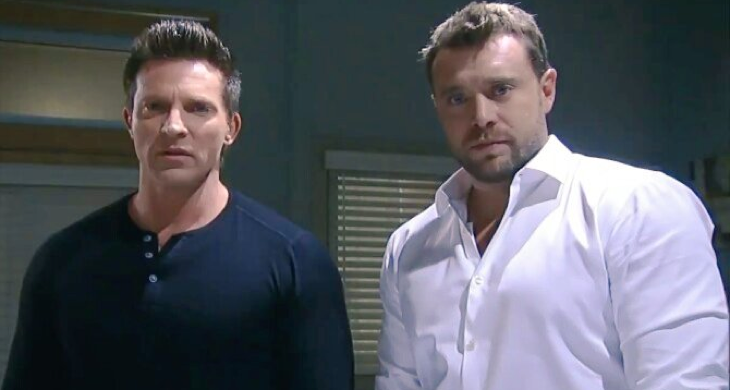 General Hospital spoilers tease that Jason Morgan (Steve Burton) and Drew Cain (Billy Miller) may finally bond as brothers over Oscar Nero’s (Garren Stitt) illness! Oscar has seemed to develop a special bond with his uncle Jason since the seizure he had in front of him and which Jason assisted with taking him to the hospital happened.

GH Spoilers – Jason Understand What Oscar Is Going Through

Drew has been able to talk to Jason much more easily than almost anyone else, and it’s been easy for Jason to relate to Oscar and his brain tumor with concern, but not overprotection, as in the case of his mom Dr. Kim Nero’s (Tamara Braun) case, which Oscar does not respond to well at all! Even his father Drew may be guilty of trying a little too hard to protect Oscar and make sure he gets the best care, and Oscar doesn’t want his life, or what may be left of it, to be controlled by anyone else!

General Hospital – Jason Has Been Acting More Brotherly Towards Drew

Drew has been appreciative to Jason for helping Oscar and reaching out to him or Kim as necessary over the past few months. Sam McCall, (Kelly Monaco) who had been the main bone of contention between the two has even noticed that Jason is starting to act more like a brother to Drew, although Drew himself has remained a bit stand-offish.

Carly is surprised Jason knows about Oscar. He tells her he tried to convince Oscar to tell Joss and be glad it's out in the open.
C, "I don't know how to help Joss."
J, "She's going to be ok b/c she has you to help her get through this."#SteveBurton #GH pic.twitter.com/SWB4HDRhLQ

That’s probably since he has Jason’s memories because there are things about Jason that Drew doesn’t like, and never will like! Drew still tends to gravitate towards childhood “brother” Franco Baldwin (Roger Howarth) for “brotherly” talks since he does remember their bond, even if not many of their shared childhood experiences.

Drew and Franco re-bonded during a time of extreme crisis when they were kidnapped and in fear of death together due to their mutual abuser Jim Harvey’s (Greg Evigan) actions. Perhaps the crisis with mutual relative Oscar will continue to bond Drew and Jason. Time will tell…keep watching General Hospital and checking General Hospital spoilers frequently to see what happens!

Bold and the Beautiful Spoilers: Taylor Out of Control – Brooke Worries For Hope and Kelly’s Safety

Days of our Lives Spoilers: The Game Is Up – Abigail vs Gabi