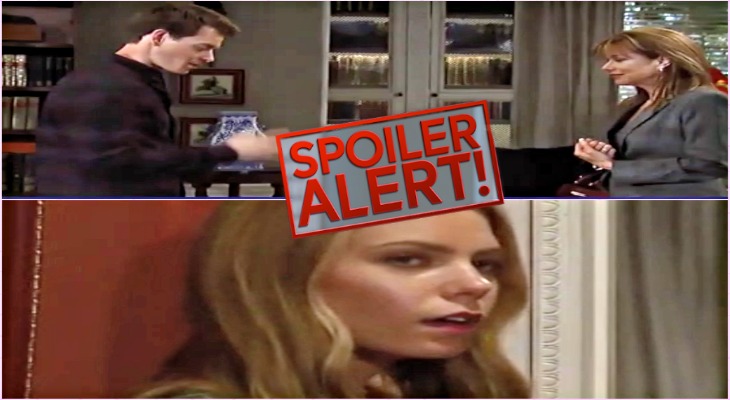 “General Hospital” spoilers for Thursday, July 12, tease that Nelle’s (Chloe Lanier) marriage doubts will rev up. As Michael (Chad Duell) and Alexis (Nancy Lee Grahn) discuss the prenup, Nelle will listen in on their conversation. She’ll seem worried as Michael talks about getting this over with ASAP.

Nelle may start to buy Chase’s (Josh Swickard) claims. He suggested that Michael’s only marrying Nelle because of the baby. Chase added that Michael could divorce Nelle and score full custody later. Thanks to the prenup, he’d be the one with all the money and power.

Michael and Chase’s plot seems to be working, but Nelle will press on with the wedding prep. Still, she’ll remain concerned as the big moment draws near. Meanwhile, Sonny (Maurice Benard) and Mike (Max Gail) will chat about the looming nuptials. Since Sonny will seem miffed about the whole thing, his dad will weigh in with positivity. Mike note that Sonny isn’t losing a son; he’s gaining a daughter.

Nelle is one of Sonny’s least favorite people, so he obviously won’t agree. However, it’s best to just play along when it comes to Mike. Sonny doesn’t want Pop to go blabbing and botch the plan. Speaking of botched plans, Liesl (Kathleen Gati) will have a real mess to tackle. She’ll get a message about Valentin’s (James Patrick Stuart) impending arrival, so there’ll be some panic in the stables.

Peter (Wes Ramsey) will be delighted over this GH rescue possibility. He’ll also enjoy watching Dr. O sweat! Peter will suggest that Liesl should’ve listened to his warnings. Now that the walls are closing in, Liesl will just have to trust Nina (Michelle Stafford) to handle this.

“General Hospital” spoilers say Nina will indeed give it a shot. She’ll rush down to stop Valentin, who’ll be waiting for the launch. Nina will declare that Valentin can’t go home, so he’s naturally going to wonder why. She’ll offer a bogus story, but Valentin will see right through it. He’ll grill Nina about why she really wants to keep him away from Wyndemere.

Elsewhere, Curtis (Donnell Turner) and Sam (Kelly Monaco) will ponder Nina’s guilt. They’ll both feel like she’s hiding something, but how can they get answers? Snooping is their go-to strategy, so maybe they can uncover some evidence soon. Nina’s in deep with Liesl, which means it’s just a matter of time until they get caught.

Over with Jordan (Vinessa Antoine), she’ll turn to Stella (Vernee Watson) for assistance. “General Hospital” spoilers say Jordan will seek a favor and hope the tension dies down. We’ll give you updates as other news and rumors emerge. Stick with ABC’s GH and don’t forget to check Soap Opera Spy often for the latest “General Hospital” spoilers, rumors, updates and news.