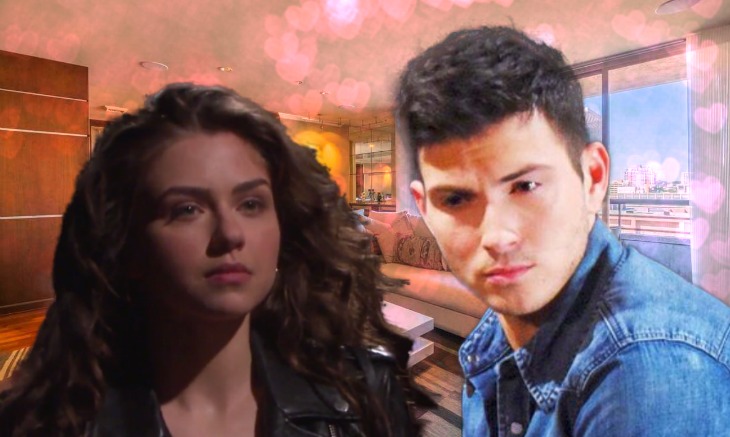 The “Days of Our Lives” recap for Wednesday, July 11, 2018 reveals, Gabi (Camille Banus) shows up to see Ari (Harper and Sydney Udell) and notices the rug is missing. Gabi tells Ari how pretty her dress looks.

Gabi apologizes to Ari again for being gone. Gabi wants to start over with Ari and gives her a gift. Ari throws the doll that Gabi gives her. Maggie (Suzanne Rogers) tries to get Ari to hug Gabi. Maggie tells Ari that she didn’t spill juice on the rug. Ari tells Maggie and Gabi that Will (Chandler Massey) is lying. Gabi tells Ari it isn’t nice to lie. Ari tells Gabi she lied to her and runs off.

In the latest #DAYS, Leo, Will and Sonny butt heads. https://t.co/ZsCmioRrzb pic.twitter.com/c5qAqUhnH1

Sonny Tells Will It’s Ok To Tell Paul The Truth

Days Of Our Lives’ Sonny (Freddie Smith) and Will discuss waiting for Leo (Greg Rikaart) in the courtroom. Will and Sonny need to find Leo’s car and his body. Will has called every impound lot within 50 miles of Salem. Sonny apologizes for dragging Will into this mess. Will tells Sonny that he lied to Paul (Christopher Sean). Sonny tells Will that Leo admitted to having an accomplice. Will tells Paul that Leo didn’t show up at the trial. Paul walks in on Will and Sonny and asks what is going on.

Paul offers to try and pick up on Leo’s trail, Sonny says no. Sonny is happy Leo is gone and he hopes to never see him again. Will says he thinks Leo got spooked and left, Sonny thanks Paul and doesn’t want him to look for him. Paul brought two sandwiches and offers to share, Will tells him Sonny is there to do a story on the no-show. Sonny asks Will if he thinks Paul sensed something. Sonny tells Will to tell Paul the truth if he needs to.

Ciara Asks Ben If He Set The Fire

Ciara tells Ben that she passed out from the smoke. Ben is glad Hope and Rafe got to her in time. Ben was scared because he cares about Ciara and doesn’t want to see her hurt. Ben wants to know what Ciara is thinking. Ciara asks if it’s possible Ben could have set the fire and not remembered. Ben asks if Ciara really believes he started that fire. Ciara reminds Ben of the conversation Ben had with Clyde (James Read) in his head. Ciara asked if Ben made it to the drug store. Ben tells Ciara his desire to help her was stronger than the voices in his head.

By the time Ben got back to the cabin the voices were gone, he tells Ciara he would never hurt her. Ciara wants to know how that fire started because she almost died in the same cabin that he tried to kill Abby (Marci Miller) and Chad (Billy Flynn) in. Ben knows how it looks, Ciara wants to know why she should believe him. Ciara questions how Ben can be sure that he didn’t try to kill her. Ben understands Ciara’s doubts but why would he come back if he set the fire.

Ciara still questions Ben, he is not an arsonist, but he is a serial killer. Ben is convinced that he is never getting out of jail because no one will ever believe him. Ciara tells Ben that he took care of her in that building. Ben says Ciara believe he started that fire, just like everyone else. Ciara says people can change, Ben says he will always be the necktie killer.

Ben tells Ciara that every time he closes his eyes he is haunted by what he did. Ben is forever sorry for what he did to the people he killed and their families. Ben says he cannot change what he did. Ben thought that Ciara had started to trust him and ask if he was wrong. Hope bursts in on Ciara and Ben and tries to make him admit he tried to kill her. Ciara tells Hope and Ben that she believes him.

Hope And Marlena Have Words Over Ben

Days Of Our Lives’ Hope comes to Ciara’s room and Marlena (Deidre Hall) arrives. Marlena sees that Ciara is supposed to be having an MRI on her leg. Hope blames Marlena for almost losing Ciara. Hope claims that Ciara was almost Ben’s next victim. Marlena understands why Hope might be upset with her and would like to help if she is wrong.

Hope claims that Ciara has Stockholm Syndrome, Marlena argues that someone had to take care of Ciara. Marlena wants to get Ben’s side of the story. Hope plans to put Ben away for the rest of his life. The nurse comes to get Ciara for her MRI, Hope runs off to find her. Marlena later runs into John (Drake Hogestyn) and tells him Ciara disappeared from the hospital.

John And Paul Talk About Sonny And Will

Days Of Our Lives’ John wants to know if Sonny was stoked about the information, Paul isn’t sure. Paul says Sonny seemed like he wanted to get him out of there. Paul tells John that things are still good between him and Will. Paul tells John that Will was working on a story last night and he believes him. Paul believes the only thing binding Will and Sonny is their friendship and being Ari’s parents.

Kate And Ted Come To An Understanding

Days Of Our Lives’ Kate (Lauren Koslow) and Ted (Gilles Marini) are talking about Leo not showing up at court. Ted thought Kate might have taken matters into her own hands. Kate and Ted question what could have happened to him. Kate should have never helped Leo, that little weasel. Kate tells Ted that Stefan (Tyler Christopher) believes she murdered his mother. Kate doesn’t want Stefan to go after Chad because he’s like a son to her and her best chance of getting Dimera back.

Kate shows Stefan the gun that killed Vivian (Louise Sorel), he questions why she has it. Ted wants Kate to put the gun away, she says it’s cursed and she needs to get rid of it. Kate believes everything that has happened is because of her shooting Vivian. Ted wants to help Kate, he is there for everything she needs. Kate and Ted kiss, he waits for her to slap him again. Kate tells Ted to take off his shirt, he begins to do so and they kiss again.