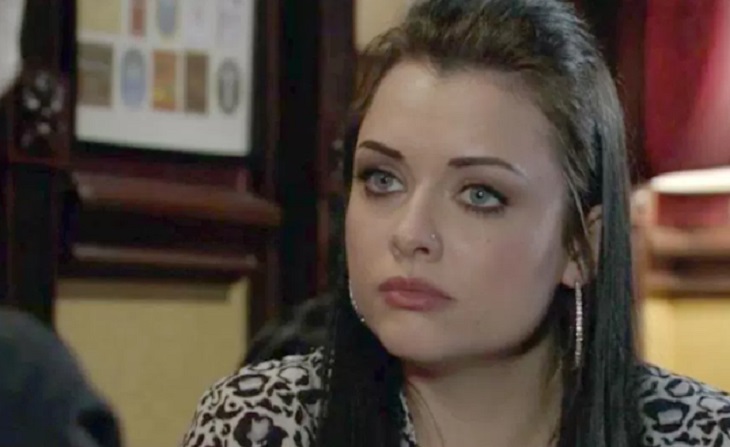 Things are looking up for Whitney Carter (Shona McGarty) on EastEnders. When you’re dating a man named Halfwit, I mean Halfway, you’re on top of the world, right?

Whitney could use a break in the love department, but really, is the guy who shot Mick Carter (Danny Dyer) in a failed heist going to be the one who puts the candles on the cake?

You never know. But we’re about to find out. It looks like Whitney and Callum “Halfway” Highway (Tony Clay) are about to rock and roll.

EastEnders spoilers tease that next week Whitney and Halfway are set up on an awkward “date” by her devious little sister Tiffany (Maisie Smith). She’s sure been busy since popping up in Walford unannounced, hasn’t she? No stranger to drama herself, Tiffany may end up being the gift that keeps on giving.

Once the smokescreen clears, the two adults are left to wonder what to do. Tiffany has ditched them, and it doesn’t take a Halfwit to figure this set-up out.

Nonetheless the two get along well enough for Halfway to ask Whitney out on a real date. Will she say yes?

Showrunners have teased that Whitney is due to move on from Woody (Lee Ryan) in the New Year, and this is as good a prospect as any. Poor Whitney was recently left standing all alone in the train station when Woody left without her to a big, new adventure in sunny Spain.

Whitney deserves a happy ending, and at least one other person is eager for her to hook up with Halfway: Linda Carter (Kellie Bright).

In revealing show photos, motherly Linda is seen helping Halfway get ready for his big night on the town with Whitney. And her advice seems to work magic because in another flashy pic Halfway and Whitney are seen clinking glasses across a candlelit table. Is this the beginning of a beautiful romance?

Fans would love to see unlucky in love Whitney strike gold and find a keeper; let’s keep our fingers crossed!