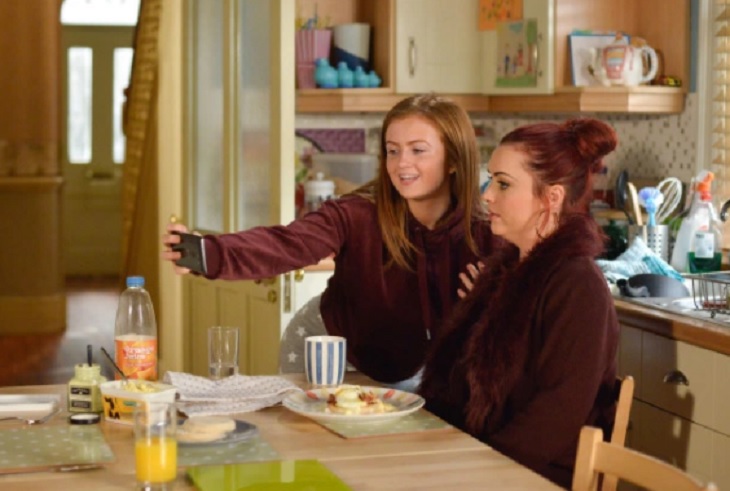 On EastEnders Tiffany Butcher (Maisie Smith) is spinning a maze of wild stories about life and death but could one of them actually be true? Big sister Whitney Carter (Shona McGarty) is about to find out and the truth could be ugly indeed.

First off troubled Tiffany turned up unannounced on Whitney’s doorstep, just as she was about to make a move of her own.

EastEnders’ Whitney wasn’t too pleased to be her sister’s keeper, and less so when she thought the girl wasn’t  being on the up and up.

So when suspicious Whitney found a home pregnancy test package in the trash can, it all made perfect sense to her. Maybe. Tiffany has a way of clouding the issues, and this time she delivered a big old whopper to deflect attention off of herself.

When confronted Tiffany literally went onto panic mode, and displayed symptoms of a having a panic attack. In the end Tiffany admitted that she may be pregnant. Wisely, Whitney decided to get another test and see for herself. But Tiffany was again one step ahead of her and thwarted that plan.

Realizing that Tiffany had played her, Whitney went ballistic. How did Tiffany respond? She recanted everything and said she’s not really pregnant and was just pretending to have that panic attack. Either she’s a really good actress, a really good liar, or both!

EastEnders’  Whitney is no one’s fool, and promptly told the girl not to let the door hit her on the way out. Amen sister!

LOVE EASTENDERS? SIGN UP FOR OUR EXCLUSIVE SPOILERS NEWSLETTER

But wait—Tiffany dropped a mother of a bombshell that stopped them both cold. According to her, mom Bianca is suicidal and that’s the real reason she fled home. Could it be?

Disturbed by the upsetting reveal, EastEnders spoilers tease that Whitney will take off to see for herself what’s really going on in Milton Keynes.

But before Whitney can figure out what’s really going, will Tiffany’s life be in danger as well? Stay tuned EastEnders fans, it’s about to get real!