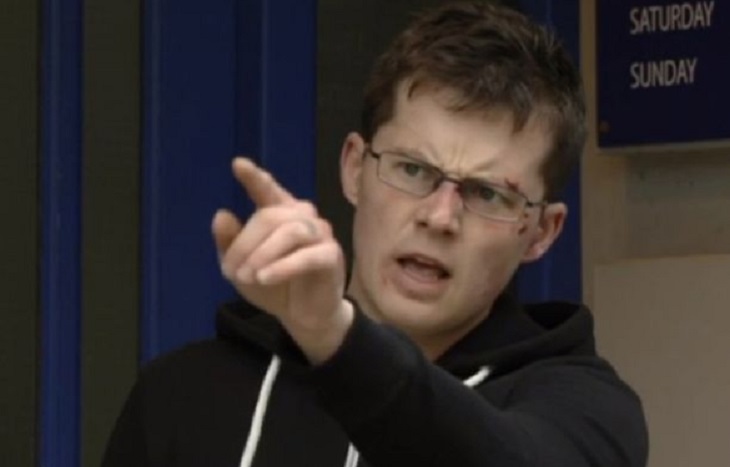 EastEnders spoilers tease Ben Mitchell may depart Walford in a blaze of glory saving his disreputable dad Phil Mitchell (Steve McFadden). Speculation is coming fast and furious regarding how the character, played by Harry Reid, will take his leave of Albert Square.

It isn’t beyond the realm of possibility that Ben sacrifices himself on EastEnders to save his dad who’s been caught up in a crazy scheme with his ex-cell mate Aiden (Patrick Bergin).

What seemed like a perfect way to get his hands on some fast cash turned out to be a comedy of errors for Phil, Aiden, and a few other misguided men, including Mick Carter (Danny Dyer).

Related:  EastEnders Spoilers: Karen Taylor Stops At NOTHING To Get Her Way

Long story short, Phil and Aiden were forced to dig up a gravesite because they thought it was the final resting place of their hoped-for money. Nope. All that digging for nothing.

In the aftermath of the men’s latest failure, the police come a callin’ on mechanic Ben, and he is shown a photo of Aiden. What will Ben do if he thinks that Phil is in danger because of the ex-con?

With the timing of Reid’s exit approaching, this latest twist may have everything to do with how Ben leaves the show.

Further fueling the juicy speculation about his departure is the return of fan fave Mel Owen (Tamzin Outhwaite). Photos of Ben and Mel together have surfaced; is she somehow tied up in what’s about to go down?

A revealing EastEnders trailer tease shows Mel at the Arches, but stops short of disclosing who she’s meeting up with. Is this setup somehow a big clue as to Ben’s fate?

Needless to say, TPTB at EastEnders are keeping details about Ben’s departure close to the vest, and they’ve done a good job of squashing any leaks.

Given the show’s penchant for unexpectedly spectacular bombshell exits, you don’t want to miss a single minute of the upcoming action, EastEnders fans!