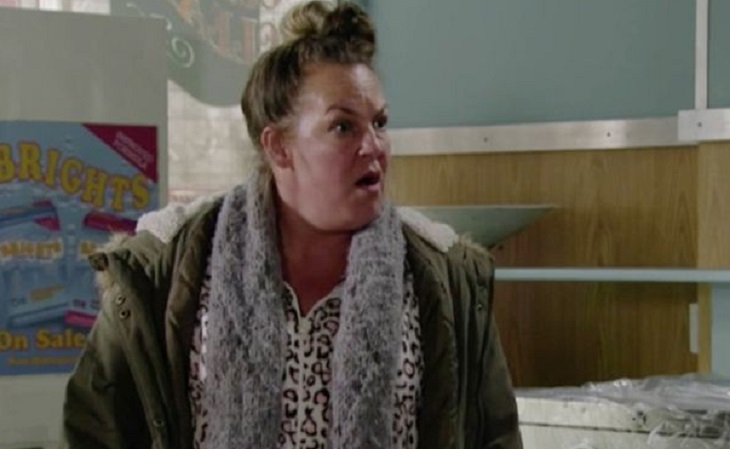 No matter what she does on EastEnders, Karen Taylor (Lorraine Stanley) manages to muck it up. Now that she’s finally got a respectable job will her latest mishap get her the sack?

It was a good day for the Taylor family when Karen was hired on at the launderette. The single mom has mouths to feed, but that fiasco with the loan shark wasn’t the answer. Now she’s working at Dot’s (June Brown) old position at the launderette, but someone should have told her to be careful what she wished for.

Even with her new income stream, Karen still needs some extra cash. She devises a plan to iron clothes for extra money, but the whole scheme may end up getting her fired after she enlists her daughter’s help.

EastEnders spoilers tease that Bernadette (Clair Norris) does her best to pull her weight in order to help Karen, but when she burns a shirt that Ted Murray (Christopher Timothy) brought in it may all be for naught.

Just in the nick of time, it’s Masood Ahmed (Nitin Ganatra) to the rescue! Sweet Masood catches Ted arguing with Karen over the ruined shirt and tries to play peacemaker. When Ted informs the laundress that he’s going to tell her boss about the mishap, Karen panics; c’mon Ted, you’ve never made a mistake?!

Instead Masood convinces him to simply have Karen pay for the shirt. The only problem is that Karen’s pockets are empty. Now what?

Revealing EastEnders pics have Karen confronting Ted in public, and pleading for his understanding. She’s been doing a bit of that recently, hasn’t she?

Remember when Ted accidentally shot Johnny Carter (Ted Reilly) in the aftermath of the explosion on EastEnders? Let’s hope that Ted has a long memory, because it would serve him in good stead right about now. He was forgiven for his misdeed, and putting a bullet in someone is a tad worse than burning a shirt.

Will Ted wreck Karen’s life just when it was getting on track?