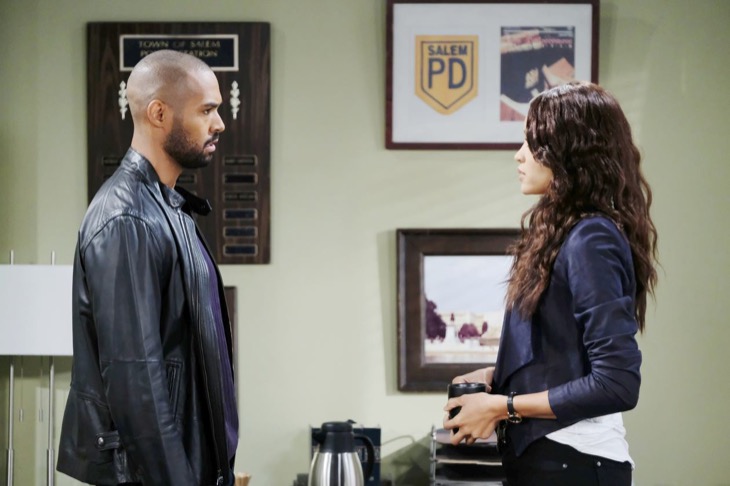 “Days of Our Lives” spoilers for the week of December 3-7 tease that Lani (Sal Stowers) will be forced to face the facts. She’s tried to fight her feelings for Eli (Lamon Archey), but that task will pretty much become impossible. The trouble will start when Lani shows up at Eli’s door. She’ll want to talk to him about something, but Sheila (Tionne “T-Boz” Watkins) will be the one who answers.

Lani certainly isn’t Sheila’s biggest fan, so she won’t be happy to see her. She’ll notice that Sheila’s wearing a towel, which will lead to questions about the nature of Eli and Sheila’s relationship. Naturally, Sheila will take this opportunity to mess with Lani. She’ll make some comments that suggest she just finished having sex with Eli, so Lani will feel jealousy bubbling up.

Days of Our Lives Spoilers – Eli Has Hope

“Days of Our Lives” spoilers say Lani will quickly fire back. She won’t be sure she buys what Sheila’s trying to sell. That’s when Eli will emerge in a towel of his own. He won’t go out of his way to correct Sheila – mostly because he’ll enjoy this envious side of Lani. It should make Eli feel like there’s some hope for their future together.

SIGH. They are so adorable. 😍 #Elani #Days pic.twitter.com/FLcWp6DWmf

Lani will remain agitated as she questions both Eli and Sheila. She’ll point out that they said they were just friends and wonder what changed. Sheila will argue that Lani didn’t want Eli, so she made her move. She’ll ask why she “should let this hot piece of business go to waste.” That’ll score a grin from an amused Eli. He’ll actually be loving the Lani torture, but he’ll second-guess it once she stomps off.

In a moment alone with Sheila, Eli will scold her for her deception. He’ll worry that it might push Lani even further away. Sheila will simply offer a “you’re welcome” and promise it’ll all work out. She’s got Lani all sized up and can see that she wants Eli. Lani just needs a little nudge in the right direction.

“Days of Our Lives” spoilers say Eli will meet up with Lani at work later. There’ll be some tension, so DOOL viewers can expect a heated confrontation. Eli will try to figure out why Lani’s fighting him on this. He’ll think her jealousy makes it clear that she’s interested.

Eli will contend that he has another option if Lani won’t stop dragging her feet. That’ll be enough to make Lani surrender. “Days” spoilers state that Lani will cave in and pull Eli toward her for a steamy kiss. It sounds like a hot romance will kick off at last.

Are you rooting for Lani and Eli? Will this lip lock be the beginning of their new love story? We’ll give you updates as other “Days” news and rumors emerge. Stay tuned to DOOL and don’t forget to check Soap Opera Spy often for the latest “Days of Our Lives” spoilers, rumors, updates and news.