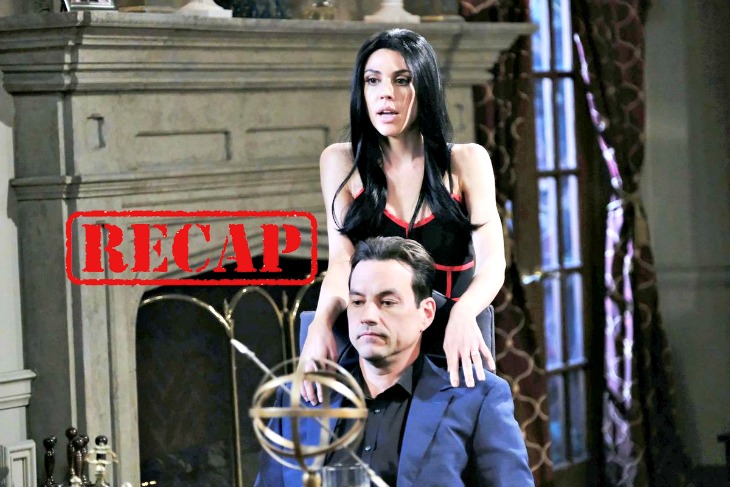 Days of Our Lives (DOOL) spoilers & recap for Friday, November 30 reveals, Leo (Greg Rikaart) tells Sonny (Freddie Smith) and Will (Chandler Massey) that they look surprised. Will says Kate (Lauren Koslow) would never do that to Sonny.

Leo tells Will he doesn’t know Kate at all. Sonny tells Leo that he admitted Vivian (Louise Sorel) was behind it from the start. Leo tells Sonny he told him someone else took over, who else besides Kate would want to take Titan down. Leo tells Sonny and Will that Kate wanted him to drop the lawsuit and he refused. Will believes Kate didn’t know Ted until the lawsuit.

Leo tells Will that’s not true and he’s had enough of this conversation. Sonny tells Will that everything Leo has said has been true so far. Will asks if he thinks Chad (Billy Flynn) knew, he says Chad would never do that to him. Will goes to confront Kate. Leo comes downstairs and asks where Will is. Leo tells Sonny once they are married he won’t let Sonny and Wil humiliate him. Leo gives Sonny twenty-four hours to make up his mind. Chad comes in and pours a drink. Sonny asks Chad about Abby (Kate Mansi) before telling him they need to clear the air and asks if Chad knew Kate was helping Leo.

Days of Our Lives Spoilers – Kate Lies To Rafe

Days of Our Lives’ Kate looks at Will’s picture an apologizes for involving Ted (Gilles Marini) and Leo. Gabi (Camila Banus) calls Kate over to the table, and Kate backs up her story. Rafe (Galen Gering) is sorry he every doubted Gabi and leaves. Kate cusses Gabi for forcing her to lie to the police. Kate asks Gabi about visiting Bayview.

Gabi tells Kate she arranged to get Gabi put in solitary by telling her she set her up. Kate tells Gabi she should have kept her mouth shut. Gabi is proud of herself and what she has accomplished. Kate wants Gabi to tell Chad the truth. Gabi refuses to tell Chad the truth just yet. Kate tells Gabi to get into Kayla’s (Mary Beth Evans) computer and print out the results again since she burned them. Kate will get the results to Chad on her own.

Days of Our Lives’ Stefan (Tyler Christopher) tells Ben (Robert Scott Wilson) that he knows he knocked him out. Ben says Chad paid him it was nothing personal. Stefan tells Ben his last guard let an important asset get away. Ben tells Stefan he can find weaknesses in security systems. Ben tells Stefan that Ciara (Victoria Konefal) believes him and will vouch for him. Ben asks Stefan if everyone doesn’t deserve a second chance. Ben says everyone still sees him as the necktie killer. Ben knows that Abby is Stefan’s wife and that he drove her insane. Stefan says Abby is his wife in name only and people believe he took advantage of her.

Lani gets jealous when she sees Eli with Sheila. Watch an all-new episode of #DAYS, weekdays on NBC. pic.twitter.com/J8P9HzjsDw

Stefan can relate to Ben because he has experienced the same thing. Ben needs a second chance, and Stefan can give him that. Stefan agrees to give Ben a job. Ben asks what kinds of benefits come with the job. Ben tells Stefan if he is on the premises he can protect the mansion better. Stefan agrees to give Ben a place to stay, but he has to pay rent. Ben’s first assignment is to find Ted, and he wants the mansion to be a fortress by the time the baby comes home. Stefan gets a call that Abby wants to see him. Ted calls Ben and needs to see him.

Days of Our Lives’ Hope (Kristian Alfonso) and Ted discuss getting a confession out of Ben. Ted is cooking for himself and Hope. Hope thinks about her wedding to Rafe. Ted brought up Rafe and Sami; he doesn’t know how she could get past that. Ted gives Hope a plate of food, and she demands to know how he plans to get the confession. Hope gives Ted a satellite phone to try and get Ben’s confession recorded. Hope comes to the cabin. Rafe asks where Hope has been and he finds the receipt for the ferry to Smith Island.

Days of Our Lives’ Rafe and Gabi have lunch. Rafe is worried about Gabi, he heard about Bayview. Gabi tells him they need to worry about poor Abby. Rafe was surprised that Gabi went to visit Abby. Rafe knows that Abby blames Gabi for putting her there. Rafe tells Gabi these are serious accusations and asks why she didn’t tell him. Gabi tells Rafe none of that is true and wants to know if he believes her.

Can Gabi get away with everything? 😱 #DAYS pic.twitter.com/8RuMEcZ3kc

Rafe thinks Gabi still holds resentment for Abby. Gabi tries to convince Rafe she didn’t do anything to hurt Abby. Rafe apologizes but seems unsure still. Kate tells Gabi too many people are catching on to her scheme. Gabi says she will get the test results and reveal the truth. Kate says it’s time the truth comes out. Will walks up and says he couldn’t agree more.

Days of Our Lives’ Chad begs Abby to talk to him. Abby turns and tells him to go away. Chad knows Abby is upset with him. Abby asks why she shouldn’t be mad when he believed Gabi over her and separated her from her kids. Chad says this was the only thing he knew to do. Abby tells Chad to take his apology and go to hell. Abby tells Chad to leave; he tells her Charlotte is doing well. Abby tells Rafe that J.J. (Casey Moss) told her. Chad tells Abby he has pictures of Charlotte and videos of Thomas (Asher Morrissette).

Chad wants to believe Abby, but he can’t help but think about the last break and not seeing what happened. Abby tells Chad to look at her and tries to convince him she is herself. Chad can’t help her get out; he wants Abby to let the doctors help her get well. Abby asks Chad what makes him think he gets to decide this for her. Abby tells Chad to get out; she never wants to see him again. Abby beats on the door and has the orderly make Chad leave before breaking down. Stefan walks into Abby’s room and she pretends to be Gabby (Kate Mansi).