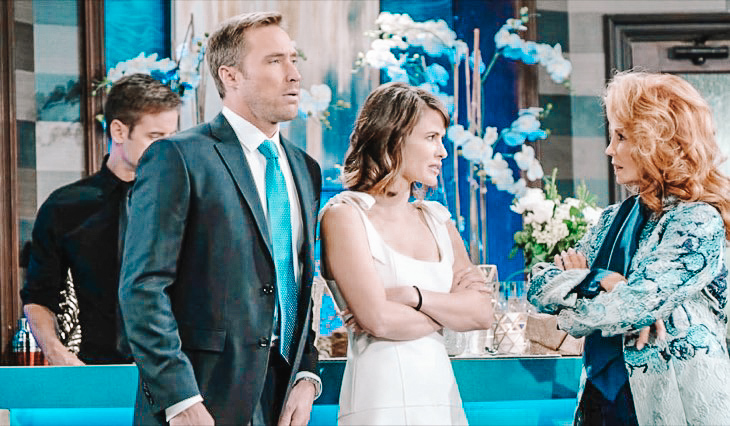 Days of Our Lives (DOOL) spoilers tease that Chloe (Nadia Bjorlin) will make an announcement that will end Sarah (Linsey Godfrey) and Rex’s (Kyle Lowder) engagement. She will reveal that Mimi’s (Farah Fath) is baby Bonnie’s (Judi Evans) mother. It sends many of the engagement party guest reeling as they need proof of this shocking declaration.

Rex is the Daddy?

People start panicking and many believe that the baby has to be related to Lucas (Bryan Dattilo). However, Rex knows who the baby daddy is. He announces, “ I am the baby’s daddy. “

In the latest #DAYS, Chloe arrives at Rex and Sarah’s engagement party with big news.https://t.co/ZsCmioRrzb pic.twitter.com/BO66ReJ3xE

Rex’s announcement blindsides Sarah. She immediately figures out that her fiancée cheated on her. As you can imagine, she is furious and doesn’t hold back her tongue when grilling Rex about it. Rex tries to tell Sarah that it happened when they were not really together, but she wasn’t interested.

Rex goes to pick up his baby girl and hold her for the first time knowing that she is his baby. Rex is all over the place. Part of him is happy as he is now a father. However, another part feels upset because he could lose his fiancée forever.

Days of Our Lives spoilers state that Rex goes and finds Sarah to tell her the truth. He admits he slept with Mimi, but it was a one-night stand. He said it won’t affect their lives as he has no feelings for her. Sarah cannot believe her ears. She believes it has everything to do with them and cannot get married to someone who has a child with another woman.

Sarah tells Rex that this is a deal breaker—she cannot marry him. Rex is crushed and cannot believe that she wants to end their relationship. He isn’t going to give up trying to convince her to give him another chance, but for now, he will give her some space.

Days of Our Lives fans, are you surprised that rex is the dad? Don’t forget to come back later for more DOOL spoilers, news, and updates!