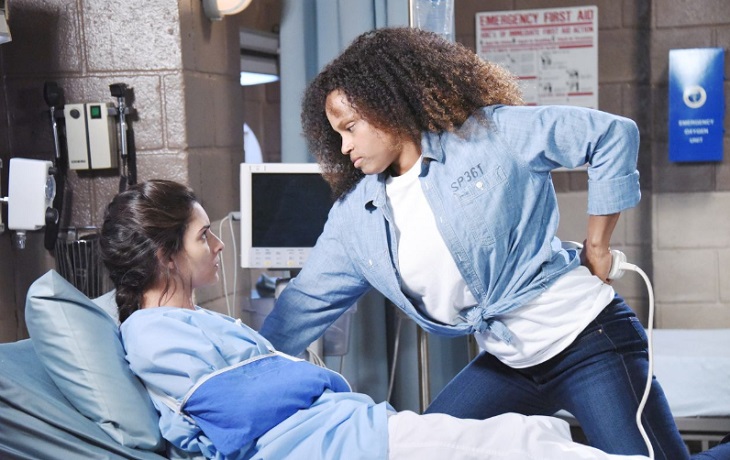 Days of Our Lives spoilers tease the warden could be in on the plot to keep Gabi in prison. It was obvious from the time the warden entered the infirmary that he was convinced Gabi [Camila Banus] was guilty. Why is he so quick to condemn Gabi? What could the warden have against her? Can Rafe get her out of her latest mess?

No one thought to bag the needle as evidence.

Rafe is a detective, the warden is there, yet neither get an evidence bag before Diane’s body is moved to check for prints or to exam what was in the syringe. Is collecting the evidence in an assault not the first rule of police investigation? Gabi obviously didn’t have on gloves so why not check for prints?

I am by no means a detective but who in their right mind would expect the truth from Diane’s prison mates? The warden already mentioned how much Diane was liked at the prison and we know how much Gabi was hated. Common sense would tell him that Diane’s friends are going to want someone to pay, and who is a better candidate than Gabi?

Why was there not a relief guard?

When and why is it okay for a guard to leave his post to go smoke a cigarette without someone to cover for him? Never is it okay to leave a victim that is supposed to have police protection, who allowed this to happen and why? Gabi already told the warden it was his fault that Diane was able to get to her, could Gabi be more right than she knows? Maybe the warden had an arrangement with Diane or possibly Raines to do away with Gabi.

Diane is killed as Gabi is about to be released.

This is Gabi’s second stint in prison for murder on Days of Our Lives, now there is a third victim just as she is about to be released. How could anyone assume this is anything but a vendetta against Gabi and Raines along with the warden are behind it? Who could be paying the warden? Could Raines have someone paying the warden to keep Gabi in prison?