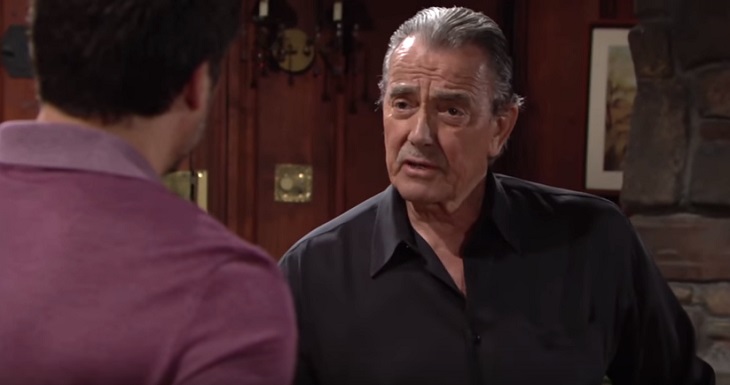 Nick (Joshua Morrow) wanted peace on ‘The Young and the Restless’. Apparently Victor (Eric Braeden) did as well. But then the ‘Moustache’ crossed the decency line, again.

This storyline has been stretched. It was on, then it was off. Now, it appears to be in the play again. Christian’s (Jude and Ozzy McGuigen) paternity isn’t something that needs to be used, but Victor keeps using it. Why and what does he hope to gain by doing so?

Why would a father who wants his son to return to the fold bring up a little boy’s paternity? Well, no normal dad would do that. And, Y&R fans know that Victor Newman is far from the norm.

Adam (Justin Hartley) is believed to be Christian’s father. The word believed was used because soapy facts are never fully certain. But, assuming various tests are true, then yes, Nick’s brother actually had a son with Sage (Kelly Sullivan) earlier this decade.

Nick learned that Victor was connected to Chloe (Elizabeth Hendrickson) and thus, indirectly to Adam’s death. That knowledge-gain split the Newman men for months. They battled each other, but eventually reached rapprochement because of what J.T. (Thad Luckinbill) did to the ‘Black Knight’.

Victor was genuinely touched that Nick battled, fiercely, for him while he was unconscious. Nick was absolutely off-put by his dad’s grave condition and has continued his search for the not so dearly departed Mr. Hellstrom.

Suggesting that Nick should return to Newman Enterprises played off the position each man found himself with regarding the other. Along with that, Nick was also seeking to fill the next space in his life. The ‘Moustache’ proudly announced that his first-born son would be back at Newman Enterprises and bought everyone who was on the rooftop at the Genoa City Athletic Club drinks. And then, well, Victor reverted to old-school Victor.

In consideration of the many positive developments that have taken place in recent weeks, it’s possible that Victor and Nick will patch things up. Possibly they’re just reacting in ways that feel comfortable.

This skirmish needn’t turn into a battle if Victor is able to convince Nick that Christian’s secret is safe. Of course it never will be, but let’s see how coming shows flow.