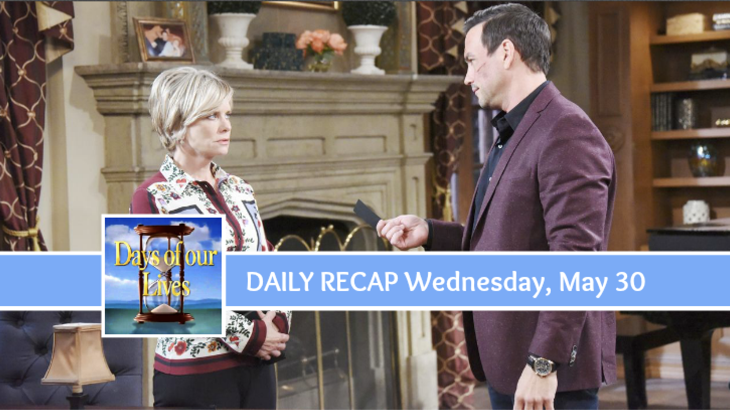 “Days Of Our Lives” (DOOL) recap for Wednesday, May 30, 2018 reveals Chad (Billy Flynn) tells Abby (Marci Miller) that Gabi’s (Camille Banus) conviction got overturned and she is coming home tonight.

Abby wishes she could celebrate with Gabi. Abby wants to do something nice for Gabi, Chad advises her to give Gabi time. Laura (Jaime Lyn Bauer) shows up and tells Abby she is there to help her get well. Chad thanks Laura for coming and the judge agreed to let Laura treat Abby. Laura wants Abby to go to Boston, Chad is stunned. Chad wants to know how Abby feels about this, she is conflicted.

Rafe and the Warden Find Gabi With Diane’s Body

Days of Our Lives’ Gabi is on the floor in the infirmary, Diane (Cassandra Creech) is dead beside her. Rafe (Galen Gering) and the warden walk in and ask what happened, Gabi has no idea. Rafe tells Gabi not to say anything else without a lawyer.

The warden confirms that Diane is dead, Gabi thinks Rafe doubts her story. Gabi repeats her story to Rafe, he still acts doubtful. Rafe says there should be security footage of the killer. The warden comes in and tells Gabi she isn’t going anywhere tonight. Rafe argues that Gabi is telling the truth. Gabi tells the warden this is his fault, Diane would have never come in if the guard was on duty. Rafe vows to find out what is on the security tape.

Ben Weston May Be Released

Hope gets a call, Ben Weston (Robert Scott Wilson) may be released. Ben had some sort of break through with a doctor that deemed him sane, Hope disagrees. Marlena sees the difference, Hope says its crap. Marlena argues that people recover from mental illness. Hope is stunned that Marlena is comparing Abby to Ben, she argues there is no way his recovery is legit. Hope tries to convince Malena that they need to prove that Ben isn’t sane. Marlena can file an objection to Ben’s release if they will let her exam him.

Days of Our lives’ Steve (Stephen Nichols) meets with Kate (Lauren Koslow) about Visionary Biotics, he wants in for the human trials. Kate can’t help Steve because she was fired and Chad quit. Steve refuses to talk to Stefan (Tyler Christopher) about the trials. Kate tells Steve it is up to him if he wants to talk to Stefan or not. Kate wants to get rid of Stefan from Dimera and Salem. Kate tells Steve that Stefan is coming after her.

Kayla Goes To Stefan For Help

Days of Our Lives’ Kayla (Mary Beth Evans) shows up and tells Stefan she needs his help. Stefan agrees to talk to Kayla, she brings up the bionic eye. Stefan throws Kayla’s comments back in her face, she doesn’t want to be there but there is nothing she wouldn’t do for the man she loves. Kayla believes this trial has potential and she has funds that aren’t allocated and offers to buy the technology, Stefan wants a 9 figure sum.

Kayla believes helping Steve will help Stefan in the eyes of Salem. Kayla keeps appealing to Stefan’s sense of good. Kayla urges Stefan to take this chance, he agrees on one condition, she has to help him destroy Kate. Kayla has to find something against Kate and Stefan will help her. Stefan watches Kayla’s reaction and knows she has something on Kate.

Days of Our Lives’ Kate joins Chad and asks about Abby. Chad says Abby is with Jennifer and Laura at Doug’s Place. Kate questions how Chad is dealing with Abby sleeping with Stefan. Chad thinks Abby holds a grudge over Gabi and that is why she slept with Stefan. Steve calls Kayla and tells her about his conversation with Kate. Stefan gives Kayla a business card and tells her to call him any time. Later, Kate gets a call from Stefan. Stefan tells Kate time is up, ready or not, here I come.

Days of Our Lives’ Abby tells Laura that Dr. Laura was ruthless and she is ashamed of what she did. Laura is sorry for the pain she caused her kids, Jennifer says no they were just worried about her. Abby hates how much she has hurt Chad, she doesn’t know where they end and she begins. Abby wants to know why she slept with her husband’s brother. Abby hates Stefan but some part of her decided to sleep with Stefan. Abby wants to know how to assure Chad that Gabby will never reemerge. It’s obvious that Abby’s love for Chad is stronger than Gabby’s love for Stefan.

Abby Promises To Get Better Soon

Days of Our Lives’ Chad rejoins Abby who informs him Laura wants to leave tonight. Abby wants to go say bye to Thomas, they leave to do so. Abby tells Chad she loves him and will do everything she can to come back healthy so they can live this beautiful life of theirs together.

Days of Our Lives’ Kayla joins Steve at the pub, he tells her about the conversation with Kate. Kayla is surprised Steve reached out to Kate. Kayla brings up Stefan, Steve says no, that bastard wouldn’t help him if he did.

The Bold and the Beautiful RECAP Wednesday, May 30: Bill Says He’s The Better Man For Steffy, Liam Calls Him Sick

General Hospital RECAP Wednesday, May 30: Peter Wants Drew To Break Him Out Of Jail