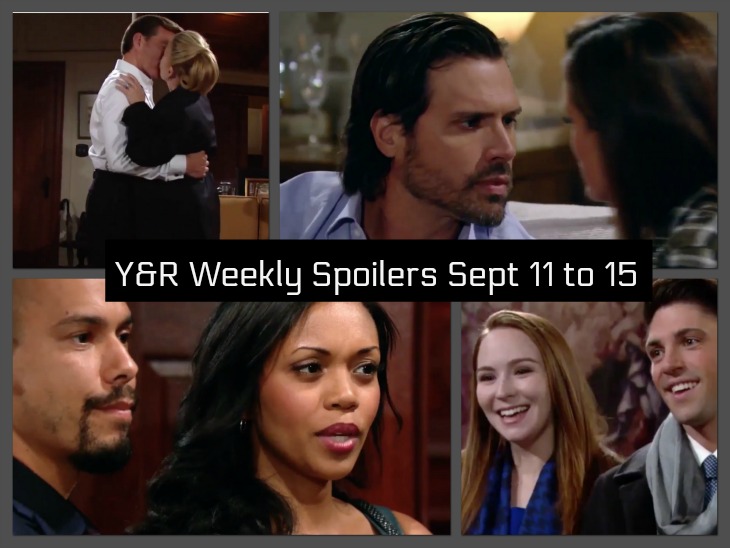 “The Young and the Restless” (YR) spoilers for the week of Monday, September 11th through Friday, September 15th tease that “Get to know Y&R all over again, your show even better, say hello!” Looks like we have some very interesting storylines heading our way in the near future. As we all know Mal Young’s writing will soon be front and center and he says you can expect good things!

In the newest CBS “The Young and the Restless” video promo it starts off with Jack Abbott (Peter Bergman) and Victor Newman (Eric Braeden). The war between these men has always been a main staple of Y&R. We have saw Jack cozying up to Victor’s wife Nikki Newman (Melody Thomas Scott) even though she left him the two are still officially married and Victor does not take it lightly when it comes to messing with his family. Not only is Jack messing around with Nikki Newman but he is also trying to cause problems for Victoria Newman’s (Amelia Heinle) company Brash and Sassy so you all can expect a war to be brewing once again between these two rivals. You don’t mess with the Great Victor Newman! Victor does not play nicely with others!

Related: The Young And The Restless Poll: Will Sharon And Nick Get Back Together? VOTE!

We also see a lot of romance heading our way. One of Y&R’s all time favorite couples Michael (Christian LeBlanc) and Lauren Baldwin (Tracey E. Bregman) are going to be heating things back up. They have not saw a lot of screen time lately and it will be nice for that to finally change. Jordan Wilde (Darnell Kirkwood) has been trying to move in on Lily Ashby (Christel Khalil) and we are going to see just how far that goes very soon.

Billy Abbott (Jason Thompson) is making out with his girlfriend Phyllis Abbott (Gina Tognoni) in the promo video, but she will witness a very close moment between Billy and his ex-wife Victoria Newman in which she will feel left out. As we all know Victoria is doing all that she can to win Billy Boy back! Do you think she will get her man back? As for another couple Devon Hamilton (Bryton James) and Mariah Copeland (Camryn Grimes) tension will grow between them. Hilary Hamilton (Mishael Morgan) is out to wreck their relationship, will she be successful?

Other Y&R spoilers suggest that Sharon McAvoy (Sharon Case) will make a perilous decision and Tessa Porter (Cait Fairbanks) will find herself in trouble. Zack (Ryan Ashton) will present a new side of himself to Abby Newman (Melissa Ordway). So will she end up catching onto what he is up to? Probably not, but Sharon will not stop until she uncovers the truth! Ashley Abbott (Eileen Davidson) will be out to prove that Graham Bloodworth (Max Shippee) is taking advantage of her mother Dina Mergeron (Marla Adams).

She finds a bill from a retirement home for Graham’s mother while looking around in his suite. Graham had recently claimed that his mother was deceased. So more will be coming to light about him. Make sure to stay tuned to CBS’s “The Young and the Restless” for a very eventful week heading our way!