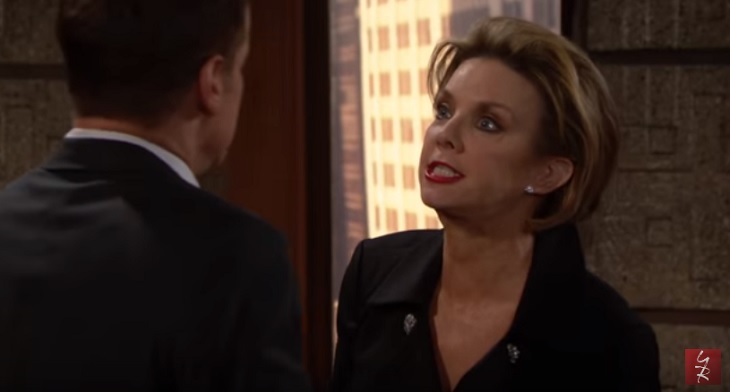 “The Young and the Restless” spoilers for Wednesday, June 7, tease that Kevin’s (Greg Rikaart) head will be spinning once Chloe (Elizabeth Hendrickson) wakes him up. At the church, Chloe gives Kevin a piece of paper. It has her next location on it. Chloe insists that she’ll provide a detailed explanation later.

Chloe gets back in the casket just before some men show up to carry it away. Dr. Harris intervenes and speaks with Chloe alone. They go over Victor’s (Eric Braeden) plan to fake her death. Chloe notes that it worked. Now that everyone thinks she’s gone forever, she can live in peace. Dr. Harris wants to take Chloe back to Louisiana with him.

At Lauren (Tracey E. Bregman) and Michael’s (Christian LeBlanc) place, Kevin will show up looking disturbed. Gloria will comment on how white he is. She’ll be worried, but Kevin will shift gears. He’ll declare that he needs some time away from Genoa City.

Kevin will suggest that he’s going to leave Bella (Gia Poeme) behind while he’s taking this break. Michael will assure Kevin that Bella will be taken care of. They’ll share some warm moments before Kevin heads off. “The Young and the Restless” fans will be anxious to see what’s in store for Kevin.

Across town, Juliet (Laur Allen) urges Billy (Jason Thompson) to support her fight against Cane (Daniel Goddard). She points out that Cane has been pushing for Billy’s firing. Meanwhile, Victoria (Amelia Heinle) grills Cane about his night with Juliet in Tokyo. He recalls the events of that evening, but Reed (Tristan Lake Leabu) interrupts their conversation.

Billy stops by later and speaks with Victoria privately. They wonder who they should believe. Victoria promises she’s not going to settle with Juliet. Billy and Victoria also discuss Reed’s latest crush. Reed douses himself with cologne in the lab before heading out.

At the athletic club, Cane finds Hilary (Mishael Morgan) and scolds her for causing trouble. He can tell that the lawsuit was all her idea. Cane delivers a stern threat about keeping quiet. He eventually ends up at home and has to share unfortunate news with Lily (Christel Khalil). She learns Juliet is claiming Cane coerced her into having sex with him.

Back at the club, Hilary tells Mariah (Camryn Grimes) that they have a hot scoop. She reveals that a sexual harassment lawsuit has been filed against Brash and Sassy. Elsewhere, Lauren objects to Sharon’s (Sharon Case) relationship with Scott (Daniel Hall). She brings up Sharon’s history, but Scott quickly puts his mom in her place.

Gloria eavesdrops and offers some advice. She lets Lauren know that this tactic will only make Scott and Sharon grow closer. Will Lauren understand that and back off? We’ll give you updates as other Y&R details and rumors emerge. Stick with the CBS soap to see twists and turns ahead in Genoa City.

WATCH: The Bold and The Beautiful Preview Video Wednesday June 7

WATCH: The Young and The Restless Preview Video Wednesday June 7